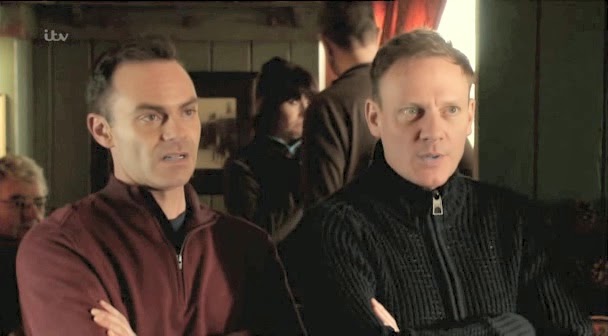 It's very clear the pub owner was homophobic and even if he didn't say the words, he very nearly did and that was that. Sean standing up for them both impressed Billy, made him proud. And yes, folks, there's that next level! Looks like we have at least one couple that's loved up. Nice for a change. The talk of the town is the way they were treated at that pub/inn. Sally and Julie are most offended on behalf of the men. Next thing you know, there's a Tina McIntyre lookalike striding around. She's a reporter from the Gazette who's got hold of the story and looking for interviews. Sean tells her in no uncertain terms that it isn't for publication but she looks like a dog with the proverbial bone. Sean later thinks it was Todd that tipped off the press but he can't get hold of Billy who is with the family of the sick child who was the beneficiary of the fund raising. Julie admits it was her, trying to do a good thing. But Sean can't tell Billy when he arrives because Billy is bereft. The child died and he's been with the family all day. Oh dear.

At least Todd did show some sincerity about the poor child, knowing what it's like to lose one himself. Sean and Billy had a lovely chat about their relationship. Billy even said the L word. The feeling is mutual.

I wonder why Eileen doesn't question why Jeff hasn't sent more photos or why he hasn't suggested they video chat or talk on the phone yet. I would find it odd by now. Sean reckons Adrian who's here at hand is a better bet than someone 2000 miles away. He's got a point. Eileen decided he was right and will back off this Jeff, much to Todd's frustration. 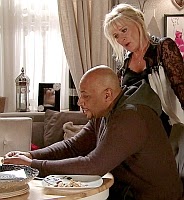 Now David knows that Andy isn't Gavin. Probably the worst person to find out ever! Even he can see how ludicrous the situation is but she's terrified the truth will kill Michael. David's got to keep the secret but you know David, he will use it, too, making his pointed remarks and cheeky looks and that's great fun watching David work it! Gail's even more wound up now that David knows. Now Andy knows that David knows, too, and David is going to use it for all its worth. Ah that's the old David we know and love!

Well it seems Sarah succumbed to Callum's charms and her base instincts after all. They got away with it and in the process, Callum made David look bad in Max's eyes and now Callum has decided to take David to court. We need Kylie, really badly now. I like that Nick is right there behind David and is encouraging him to do what David does best, scheme! He knows from bitter personal experience. 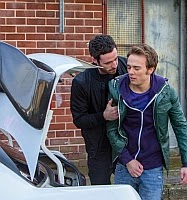 Adding two bickering women to the Platt Towers isn't helping, is it? Poor David is going out of his mind with all the stress he's under and just wants his sister and niece to go away but Sarah doesn't have a job! He's got a plan to get rid of Callum, though and he's using Andy to do it, via blackmail. Loved the scene in the car where Andy tried to persuade David that his plan wasn't very good. He didn't believe David would really follow through on his threat to tell Michael or the police and then didn't think David would do anything to hurt his mother. You're new here, right? Here's the plan. Buy drugs. Check. Plant them on Callum. Or, Plan B, plant them in Callum's car. But Andy is no nervous he drops the drugs and spills then and gets caught by the gruesome threesome, Callum, Gemma and Macca, none of whom are very scary.

Andy gets dragged into the pub and David has to rescue him so he has to admit to his plan to Callum. David does the right thing and David's truth feels real to Callum. Callum hollering at David didn't scare him in the least until they threatened to take him somewhere else to beat the crap out of him. David can run pretty fast when he wants to but they caught up with him and gave him a pretty good scare and into the trunk of the car he goes.

This all makes Andy late for the birthday party that Gail and Michael are having for "Gavin". Michael is chuffed to finally be able to do this for his son. Steph and Gail worry what David and Andy are up to to make them late. Steph and Gail are really worried but Michael doesn't realize why they're so concerned. Michael just sulks because Gavin is late. Gail isn't willing to think that David was behind the disappearing act in the least. Are you new here? Gail is still sidestepping Michael's questions and having to lie to him and Andy just wants to get out of town which really ticks off Steph, that he'd leave her after all she's helped him through.

That's it. He's dumped. And Luke witnessed it. Hmmm. Doesn't want his little sister hurt. He knows there's more to it and she ended up telling him the truth. That's person number three, no, four that knows the secret. (Steph, Gail, David, Luke) And now Andy's going to have to go to another wedding with a black eye and Maria isn't too pleased that Luke has that sort of temper! 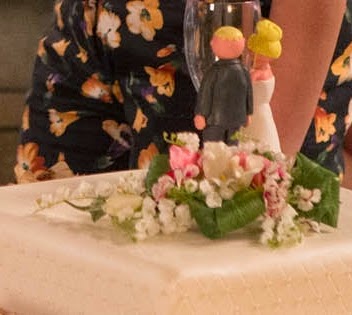 The day of Gail and Michael's second attempt at a wedding dawns and the bride didn't look very happy. Audrey is swerving the wedding and Gail is full of guilt. Michael is nervous but is told to follow Gail's lead. I do like Gail's wedding outfit, glad she saved it from the last attempt.

The wedding starts. Gail's in a state and Michael's lovely words and the registrar's about trust only pumped up the guilt numbers even higher. I love that Michael gets emotional. It makes a nice change from the stiff upper lips. But it looks like Gail isn't going through with it!

Does Anna even have the right to keep Faye out of school even for a few months for her to get adjusted to being a mother. It might have made more sense if Social Services was there and explaining what was going to happen. Poor Faye really is overwhelmed at how much her life is changing. Tim is a great support. Faye decided to name the baby and make more of an effort. Miley. After Miley Cyrus. *sigh*

Jenny is showing more erratic reactions. She picks up Jack from the child minder and notices he has a little rash on his neck. She panics thinking it's something serious though Leanne reckons it's just a reaction to washing powder or something. Jenny is taking Jack to the doctor anyway. But Tyrone saw them come out of the medical centre so Jenny had some splaining to do and she lied convincingly enough but Jack spilled the beans. Every time Jenny messes up in one way or another, she wants a fresh start. How many does one person get? Sophie more and more doesn't trust Jenny and she can't make Kevin see it.

She had another encounter with Rita in the Kabin, and with Norris who gave her no respect. But what was odd was Jenny saying some people have long memories. Norris had none at all of Jenny, he only knows what Rita's told him. There does seem to be a slight thawing between Rita and Jenny, though or is it my imagination? Ah but then Jenny let a stranger think Jack was hers. Easier than the long explanation? Maybe.

Loved that there's a new Sally Snob story. A bit of graffiti on her wall, Roy thinks it resembles that of the graffiti artist Banksy who pushed his street art to a well paying income. Now Sally thinks it's a Banksy and it could be worth something. Sinead's back again. So is her mate, Sam. But Sinead may be coming home, soon! This was the most realistic hospital stay on the show ever! Chesney doesn't look too keen on the lad, though. He probably smells a rival. I think Sam may have a crush Sinead but she doesn't seem to be looking at him with anything but friendship. Where the heck did Michael come from with the birthday cake? Out of a closet? That must be the door to the garage that's attached to Number 8. Loved David's impression of Audrey!

Sharif and Roy have met the woman who's husband owned the neighbouring allotment. Her name is Cathy. Turns out she's a widow, he's died about a year ago. They start off on the wrong foot with her but Roy makes peace and offers their help to clear her allotment. Notice that Sharif seems to always avoid doing the heavy work? He comandeers Zeedan and Simon whenever he can and he let Roy do the bigger share of the work on the neighbour's space. Sharif's plan is to take over Cathy's plot, then he wouldn't have to share with Roy so he planted seeds of a different sort.

I have always been a fan of David, who just wants a normal family life. (And to be the smartest person in the room, which he is many times.) I loved him this week doing his Audrey impression, his dialogue in the car with Andy/Gavin,("What are you, eight, when Andy moaned he was missing his birthday), and pretty much every time he talked to Gayle about the Andy and Gavin swap. Smart, smart dialogue.