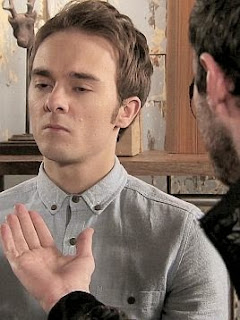 >The custody hearing is a bit of a mix. Each solicitor bigs up their client but then Callum's drops the bomb. Somehow, they've got hold of all of David's past misdeeds that paint him as very disturbed. David can't keep quiet and insists he's a changed man and it's all down to being Max's dad. He has to be pulled out of the courtroom to calm down and even though Callum should be looking smug, he isn't so much. Not sure why. The judge then says they will need a full report on both men's suitability and in the meantime, Callum will have Max overnight two nights a week. I hope that means at his mother's because that tiny grubby flat is no place for a child! And poor David thinks this is the beginning of the end and he's going to lose Max in the long run.

He also thinks Sarah was the one to tell the enemy about David when we saw that Bethany at least started the ball rolling the other day. She probably told him all the rest. Even so, it's pretty clear from a pointed phone call that Callum is still dealing. It's not helpful when Sarah brings Callum around but then we find out that Sarah didn't tell Callum all the dirt, Bethany did and admitted it. I don't think she realized the harm it does. Callum admits he used it so he could see Max and rubs it in David's face. Audrey is right, David getting into a state isn't going to change anything or help.

Nick is trying to get his family to get all warm and cuddly with Erica who is definitely not the warm and cuddly type. Gail never learns her lesson. Why be so openly hostile? That's just like David, it's not going to help matters any. Gotta say, though, I love Gail being bitchy towards Erica and Erica always winding her up! And for a couple that doesn't appear to be a couple, Nick doesn't seem to mind having Erica stay over randomly.

Ah sounds like Faye is keeping up with schoolwork even if she's not attending class. Ken's concerned about a casserole that has been sitting uncooked in the oven (which is broken). Microwave it! At least it will be cooked! 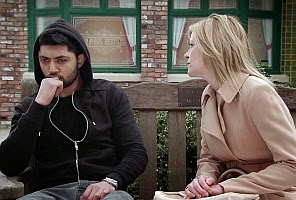 Now that Tony's planted the Spanish run away in Liz's mind, the thought of the sun in Spain is becoming more and more inviting. Tony is good. He works on her subtly and it looks like it's working, much to Tracy's glee. Liz sounds out Steve about Spain but assures him she won't abandon him. Steve now thinks he would be ok without his mother around and doesn't want to hold her back but she's still kind of leaning towards staying around. Still, Tony overhears and realizes she's wearing down and it's decided. She'll sell her share to Travis Ltd. Michelle is worried but Steve seems optimistic.

Tony is thrilled and Tracy is beside herself with joy. Tony is having the guilts, however, knowing Liz is going to be hurt. And what about Steve and Michelle? Tracy and Tony taking over the pub is going to have them out on their backsides, too. Michelle is right to be worried. 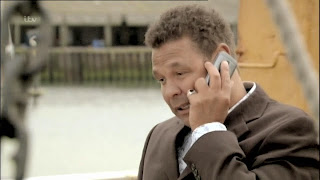 Meanwhile, Michelle is whining about her love life but the beautiful basque that Carla gives her is discovered by Steve and it has the desired effect. Love life sorted. Now the hen night needs to be arranged. Lloyd is doing the stag do except Steve can't face going in a mini bus with the lads on the way to Liverpool. I get that. But why didn't they tell him where they were going so he could take the train? The lads were unimpressed and Lloyd got the hump when the pub turned out to be a wash out and the lads were unimpressed. It all seemed to come back to that fractured friendship. The evening didn't last too long and it ended with Lloyd drifting away on a Norwegian fishing trawler to northern Norway! Eeek!

Michelle continues to worry about her job but Carla cheered her up no end. She's going to buy Liz's share! Tony was horrified when Carla pitched up offering to buy in rather than an anonymous company. That could be interesting. So let me get this straight...Tony bought Steve's share of the pub. Steve gets the money from Tony (Travis Ltd.) and gives it to Tony to repay the tax loan. Basically, Tony's bought half the pub for nothing so technically, wouldn't Steve still owe him that tax money? And Carla's buying Liz's share of the pub so she's now in partnership with Tony (Travis Ltd.). My brain hurts. And what about Liz? Is she still going to Spain? 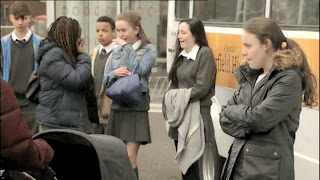 Well, after Anna completely humiliated Faye in front of the bullies at school, the girls all coo over the baby. Were they actually the bullies or does Faye actually have a few friends? Doesn't matter, the word would get around anyway. It seems like Anna's actions gained Faye some sympathy. Anyway, Anna refuses to apologize and she's at the end of her rope. She rants and raves and shouts and is really nasty to Faye even pointing out that Faye of all people (meaning she was in care and subsequently adopted) shouldn't be the one that doesn't want her own daughter. History repeating itself and all that. Faye does get a few digs in as well but that poor child certainly has taken the worst of it and I wish she'd have gone in her room and called Social services right then and there.

Tim seems to be on Faye's side but has finally realized that Anna really isn't coping. But, there's the doorbell and guess who it is? Jackson and his mother Josie. Jackson saw the baby at school and realized he had to admit the truth. Josie asks if they can have his name on the birth certificate and says they'll help share the load. I'm waiting for the financial input here. Later Tim takes Anna and Faye over to his house, interrupting Sally's plan for a nice night in.

Jackson and Faye register Miley's birth and then bicker over her middle name, or lack of. Tim then catches Anna and Sally bickering over the housework and Anna storing the glasses rim down and tells them they're worse than the kids. Anna is staying at Sally's for a bit of a break. Not much of one though when Anna takes it on herself to tidy up and iron and mop floors. Faye seems to be thawing about the baby a bit, too.

Carla's paying for some of the wedding reception catering through Nick and Erica sees them sitting together looking friendly. Even if she and Nick aren't in a relationship, Erica seems to be a bit jealous and puts herself between them. Carla is wistful though Leanne thinks she could still nab Nick if she got in there now before it's too late. Nick's fairly honourable when it comes to family, though, so I don't know. Possibly.

Sophie is on a rant and a campaign and it's all against Jenny but nobody believes her. But on a nicer note, she and Maddie are planning to move in together in a flat of their own and they're all loved up and looking towards their future. Why am I uneasy?

Eileen still can't let go of Jeff from Dubai. He (Todd) is hitting all her buttons and she can't help be drawn to someone that seems to be exactly what she wants aside from the miles and miles between them. Even after Adrian asks her to delete her dating profile and spends the night with her, she's still lured back, egged on by Todd.