Loveys, I am flamin' exhausted. How long is this night gonna last? I've been trying to eat this packed lunch for the past three hours but everytime I unwrap the clingfilm summat else happens!
I'm reporting from outside The Kabin where me heat detecting disposable lighter is picking up traces of an OAP trapped inside. I knew Rita was there anyway, I can smell that Yardely Lace perfume she wears from twenty paces.

We've witnessed some very distressing scenes over the past hour with Claire hearing the message Ashley left for her. What folk didn't hear was the message he left for me when he was trapped inside The Joinery about me sausages being ready to collect. I've mentioned it to Claire but she won't open up the shop for me to get them - the witch - she's never going to keep that business going with that attitude!
Loveys, there was a ray of Hope last night in all the horror, a Hope for a better world, a Hope of new life...you know what I'm talking about don't you loveys? That's right, Ashley's sausage recipe hasn't died, it lives in Graeme's head... oh and Fiz has had a baby an' all!
I like a good wedding me loveys but I'm old fashioned, I always like a groom to be conscious when he's delivering his vows. It was a cracking ceremony though, apart from his heart stopping at the end obviously, that always ruins the day dunnit. At least he's made an honest woman of Leanne so there's a first time for everything! 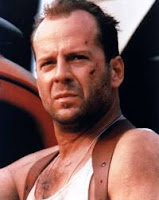 Is it just me lovey or was it difficult to tell what was David's 'beard' and what was just a bit of muck on his face? I swear if he wiped that goatee with a bit of spit on a hankie it'd come clean off - like his fake tan.
I was picking up some essentials from the rubble of the shop and who did I see in there? Becky flamin' McDonald! Stealing! Honestly, you can't trust anyone nowadays loveys... I did manage to grab meself a few Ginsters and ciggies from the wreckage for nowt though.
I know what yer thinking, 'she's not mentioned Eddie yet' but I do have to say that even after an explosion and tram crash he still manages to walk that fine line between rugged and handsome. If this was an action film he'd be Bruce flamin' Willis - in man made fibres - and I'd be the love interest and he'd rescue me and then he'd leave Anna and then Gary would accept me as his new mum and then we'd run the Rovers and then he'd bake me cakes and... sorry, I don't now what happened then loveys...it must be the stress...I'd better go now.
If you want to tweeter me then do it 'cos I love to chat and that.
This is the news with Brenda on the cobbles for the Coronation Street Blog.
Posted by Tvor at 11:35