What's next for Weatherfield, blogger David's take on it 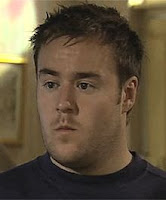 (This post was originally posted by David on the Coronation Street Blog December, 2010, reposted to this blog with permission.)

As we speak there is but one episode left of what has been an unforgettable Golden Anniversary week on Coronation Street. We are all still wondering about whether or not Peter will survive his cardiac arrest and if anyone will discover Rita under a mountain of Toblerone.
The next tantalising question though is - what happens next? Phil Collinson and co have the ability to lead the remaining characters in any number of directions. In the coming months, Tyrone could be one to watch. He's a man bereft, having lost everything that was precious to him, within a matter of hours. Will he become a tougher, meaner person as a result? Will he crumble and, if so, who will be there to support him? Rumour has it that such support may come from a surprising quarter.

For Claire and her boys plus Janice Battersby, it's the end of the road. No doubt Claire will begin a new life in France with her mother but what's the motivation for Janice upping sticks?

There's going to be no Corner Shop or Kabin for the forseeable future. Where does that leave Dev, Norris and, if she lives, Rita?
John Stape's web of deceit looks like spinning totally out of control should worrying harridan Charlotte survive (nice one for keeping her alive, scriptwriters!)
One possible stoyline that could emerge is the future of the Joinery site. Could there be a clash between the owner, Nick Tilsley and other residents who may wish for it to remain undeveloped?  Maybe there could be some form of memorial garden in its place but will sentiment override commercial interests?

Whatever happens, we can all take comfort from having viewed a week of gripping, emotional drama. With the dust beginning to settle on the cobbles, we now have the intrigue of where 2011 will take the survivors and the bereaved.

Where do you think the characters are heading in the up and coming months?
Posted by Tvor at 13:38