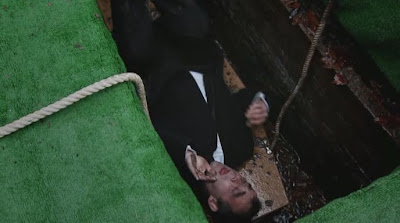 (This post was originally posted by me on the Coronation Street Blog in December, 2010.)

Tonight's double episode of Coronation Street was all about forgiveness, the lack thereof, that is. The focus of the episodes was Molly's funeral and boy, it didn't half skip the plot along, didn't it?

Tyrone put two and two together and correctly came up with four and sussed that Kevin was the other man and father of baby Jack. Sally was horrified at Kevin's hypocrisy and could barely stand to be in the same room as him let alone look at him or speak to him civilly. Ironically, Sally said part of her wished it was Kevin in the grave and seconds later, he was, thanks to Tyrone thumping him. Kevin's world is irreparably in a thousand bits, with even his beloved daughters turning their backs on him.

Tyrone pushed everyone away until Sally forced him to accept the baby as his own. That baby is loved by Tyrone and is where he belongs and though he's not Tyrone's by blood, he'll be what gets Ty through all this. As Sally pointed out, Tyrone knows what it's like to regard someone not of your blood as a father.

The other thing that has been bothering me that finally showed up tonight. Kevin and Molly were lovers. In spite of how it ended and in spite of Kevin rejecting her firmly, she did mean a lot to him at one time. I wondered when Kevin was actually going to grieve for her but he seemed too preoccupied in his guilt and trying to maintain damage control with Sally. Finally, at the graveside when he was about to throw dirt on the coffin, it seemed as if it finally hit him and his face was pure grief, not guilt for a change. That's also what Tyrone saw and what made him realize the truth. 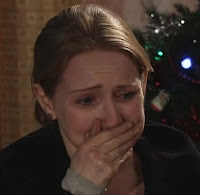 Elsewhere, Nick is sinking into depression due to his guilt over the accident. Nobody seemed to be able to make him understand it was an accident and you can certainly understand that. Wouldn't you blame yourself, too? It took Claire, after a few sharp words from Rita, to tell Nick that she knows he didn't mean any harm though she wasn't ready to forgive him just yet. The unspoken words were that she would in time and so should he. Watching her confront him put a big lump in my throat, I can tell you.

We have Becky looking distinctly uncomfortable with the news that the Alahans have the police investigating the looting at the shop and when she heard that there's a possibility that the CCTV caught the thief, she was probably mentally measuring her wrists for handcuffs.

Norris was, as usual, thoroughly dislikeable in his quest for gossip, to hear it and to spread it. What a nasty little man his is!

Peter is facing some time in a wheelchair. No surprise there. It's one of the soap laws that someone surviving such a horrific accident will have a temporary disability of some sort. I had suspiciously moist eyes when Peter was talking about not being able to thank Ashley for saving his life. Leanne, too, tried to talk to Nick but he still only has eyes for her.

Fiz and John are bonding over their baby Hope, willing her to survive. Yet he still tells lies and said he had no idea when Charlotte's funeral was. I wouldn't think Fiz would think it was strange if he'd said it was Monday and she might not even be all that perturbed if he said he wanted to go as she was a former colleague. Lying is second nature to him, he can't help himself.

We had some incredible acting tonight, too. Alan Halsall in particular, blew me away and Julia Haworth, Sally Dynevor and even Michael LeVell were top notch as well. Everyone in the cast altogether seemed like one working and well oiled  unit tonight! Well done, all!
Posted by Tvor at 20:51