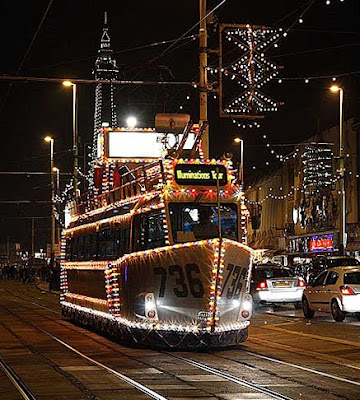 (This post was originally posted by Fat Brenda on the Coronation Street Blog in December, 2010, reposted with permission.)

Well loveys, what a night it's been.

I'm afraid I've got some terrible news from the cobbles loveys... Kylie flamin' Granger is back! Just when you thought things couldn't get any worse!

Being the intrepid reporter I am I've snuck into Fiz and John's to bring you this report and I was met with a gruesome sight, Schmeichel's only gone and done his business on the flamin' carpet! The poor mutt must've lost control of his bowels with all the commotion in the street... oh and there's a dead body in here an' all. I think it's that Charlotte but to be honest it's quite difficult to tell with that hammer in her head.

The emergency services have finally turned up. I know they're stretched an' all that but come on, three flamin' days! They're swanning about the place like they own it, but to be fair to 'em they've done a cracking job and rescued the tram driver! Flamin' hell, talk about priorities, he's the one that drove into 'em all!

I pleaded to be the one who broke Ashley's death to Claire - what with her being me colleague at Streetcars - and to try and cheer her up I told her the news in french. 'I'm afraid it's au revoir Ashley lovey,' I told her. She didn't take it as well as I'd hoped, I won't bother next time!

The good news is Sunita making a miraculous recovery. You see the trouble with getting trapped in the wreckage of a shop is you don't know what's blood and what's ketchup. Between you and me loveys I reckon she knew that was Heinz all over her but she wanted a bit of attention. I don't blame her, she's always had a thing for Ciaran and she soon recovered once he'd swept her up in those taut Irish arms of his.

By 'eck you can tell yer in Weatherfield when the ambulance driver gives you oxygen and tells you to 'take a drag on that' like they did to Fiz! What was all that about? I thought they were gonna administer some waccy baccy.

Nice of Audrey to turn up at the end though and offer support, I notice she did pop into the salon to check her hair before she came over though. Class!

Sorry about the picture by the way but I'm not that good on the into-net and it was the only tram I could find. I think Rita would appreciate it though, if she wasn't trapped under a load of turkish delight and pontefract cakes.

Did you see my - I mean Anna's - Eddie loveys? What a trooper. What a fighter. What a man! Bravely drinking his sixth brandy to get over the shock of running from the rubble.

If you want to tweeter me then please do, I like a bit of company.

This is Brenda on the cobbles - for what feels like the longest flamin' night of me life - for the corrie blog.
Posted by Tvor at 19:16