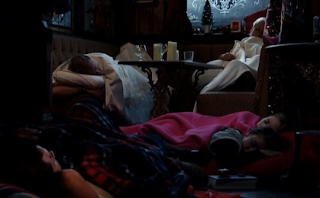 (This post was originally posted by Chewy on the Coronation Street Blog and The State of the Street in December, 2010.)

"It's Coronation Street as you have never seen it before" said Phil Collinson, and you know what, it really was. What a brilliant week of television, the week began with a street so divided that you could cut the tension with a knife.

By the end, the street were all sleeping quietly together in the Rovers, with Steve stood at the doorway, thinking over what had happened over the last three hours. Roy and Hayley soldiered on through the night, providing warmth and a smile to all who needed it. Josh and Freddie lay fast asleep, unaware that they had lost their daddy.

Two themes were very present in the final minute, hope and devastation.
Posted by Tvor at 21:00