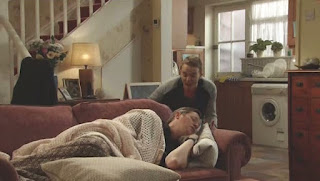 Adds to the attraction award: Gail knew Eileen would be narked if Paul spent afternoons sleeping at hers and didn't she enjoy winding Eileen up! Oh I did enjoy those scenes.

Musical ambience: "Everybody Hurts" playing in the pub. Poor Ty is feeling it.

Timing sucks award: Naturally the first minute you're close to another woman, your ex comes in the room.

Rubbing her nose in it award: Sunita only suggested drinking in the Rovers to get a dig in at Stella.

Feckless Fella award: Gold medal! Karl. He probably let Stella do all the work too and he's not really looking for work. 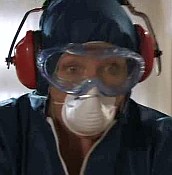 Wearing blinders award: Tyrone thinks everything will be ok with Kirsty now. It just doesn't stop overnight. Not without help. Kirsty is *still* convinced that Tina fancies Tyrone.

Word twisting award: Kirsty is very good at turning everything Ty says around to accuse him of something or other.

Losing your touch award: St. Ella was giving Dev lots of advice. Why didn't she take him into the back room? I think her halo is slipping!

Fractured Friendship award: Seems to be all over for Ty and Tommy.

Tommy to Kirsty "So you're a bossy cow. There are worse things you could be" (there are worse things she IS)
Eileen about Gail "The world's smuggest woman just got smugger"
Kevin "I'd be sleeping with one eye open if I were on Gail's sofa"
Tina "I live with someone who uses the bathroom floor as a wardrobe"
Paul "Your mum is one in a million" David "Yeah, but not in a good way"
Eileen to Gail "I'd rather have a drink with Freddy Kreuger"
Tina about Kirsty "She's not just two butties short of a picnic, she's lost the whole flamin' hamper"
Ryan to Roy "Ciao" Roy "Grazie" (bringing it nicely full circle)
Steve about Michelle "She's out of my league"
Maria to Jason "You are so straight I'm surprised Owen doesn't use you as a spirit level!"
Karl "Doesn't matter if it's a wok or a chip pan, a fire's a fire"
Tyrone "How can things be so good and yet so bad!?"
Kirsty to Tyrone "I need you to choose" (uhoh)
Steve "Not that many blokes can still fit in their wedding suit" Michelle "that depends on which wedding it was" Steve "...fourth"