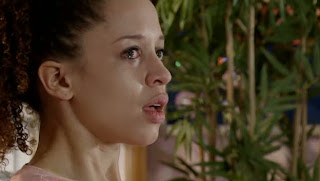 (This post was originally posted by me on the Coronation Street Blog in September 2012.)

The Sun has a good interview today with Natalie Gumede about her on screen character, Kirsty, who is about to give birth on Coronation Street tonight. Natalie isn't a mother herself so she watched the documentary show One Born Every Minute for research. That wasn't always such a good idea, particularly while having lunch! She's concerned with getting right and has said it's about more than just the screaming and hollering you see often on screen.


“The most useful thing I was told was that giving birth is primal. It’s not about shouting and screaming — it’s about the push and the job in hand. You can’t worry about how you sound or how you look. I just hope I’ve managed to get it right.”

Gloria Price provides some comic relief while Marcus is on hand to deliver the baby in the back room of the Rovers.
Natalie and Alan Halsall both have been deeply affected by the abuse storyline as it develops. The scenes are difficult to film and take a lot out of both of them. It must be gratifying to hear that real life victims are getting help after watching this storyline. Natalie has also won awards and award nominations as Best Newcomer. The TV Choice awards are tomorrow so we'll keep our fingers crossed that she comes out a winner again!
That makes three babies born in the Rovers to my recollection. Do you remember the other two?
Follow Natalie on Twitter and she's also got a blog on her website.

Wasn't Violet and Sean's baby born in the Rovers?

yes, Dylan was born in the Rovers. There was one other back in the 90s.