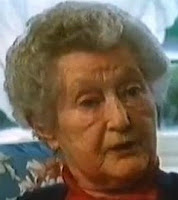 (This post was originally posted on the Coronation Street Blog July 2012, reposted to this blog with permission.)

First appeared: 14th December 1960
Last appeared: 13th May 1964
Lynne Carol played the role of busybody cleaner Martha Longhurst between 1960 and 1964.
Born in Usk in Monmouthshire, South Wales in 1914, Carol was born into a theatrical family and debuted on stage at the age of three and for the next forty years her career was based in the provincial theatre.
In 1960 she was cast in the role of 61 year old nosy pensioner Martha Longhurst in new drama serial Coronation Street. Carol had to play a character who was 15 years her senior and did a convincing portrayal. Debuting in the second episode, Martha was part of the famous Rovers snug trio that consisted of her, Ena Sharples and Minnie Caldwell. Their friendship dated back to their teenage years and they grew closer as they all became widowed. Known for her beret, Martha was hired as a cleaner at the Rovers in 1963, a job that allowed her to hear the gossip first hand. During her tenure, Martha’s storylines included clashing with Ena on numerous occasions and rekindling with old flame Ted Ashley – she followed him to London thinking he’d propose, but she had mixed signals.
In 1964, Tim Aspinall (1935-2000) was appointed as the new producer of Coronation Street and proved controversial when he decided to axe five members of the original cast - Lynne Carol being one of them. Aspinall wanted to revamp the show and get rid of some deadwood. He felt that Carol would be able to find other acting roles. Carol received the news in the papers and was devastated and many of her co-stars, including Violet Carson (Ena Sharples), called for her reinstatement. But to no avail. Martha was killed off that year and died of a heart in the snug, unnoticed by everyone. When they recorded the death scene, Peter Adamson (Len Fairclough) paused for a while before announcing her death, hoping that the producers would change their mind but they didn’t. Viewers sent thousands of letters complaining about the decision to kill off Martha – the only character out of those axed to do so. Carol became bitter as she felt it was a mistake as her character was so popular and, with Violet Carson and Margot Bryant, provided the rich moments of the programme. After Martha’s death, writers acknowledged that maybe it would’ve been better to have her leave the street rather than killing her off. It has been said since then that killing Martha off has been the show’s biggest mistake. Martha’s spirit (pardon the pun) has lived on in the show. Betty Turpin thought she saw Martha’s ghost in the snug in 1975; and in 2011 Dennis Tanner joked that the mysterious voice Roy Cropper could hear was Martha’s ghost!
Between 1960 and 1964, Lynne Carol appeared in a total of 298 episodes of Coronation Street. For the rest of her career, she struggled to find work and suffered from being typecast. She secured a role in new BBC soap opera The Newcomers in 1965 but it wasn’t permanent. She had roles in other TV programmes like Albert! (1969-1972), Z Cars (1972-1973) and Crown Court (1975), but they weren’t top of the bill roles. Martha Longhurst’s shadow hung over her. Her last TV role was in BBC2 Playhouse in 1980 before retiring from acting. She made her last TV appearance in 1988 in a tribute programme to Margot Bryant where she spoke from her home in Blackpool. She died two years later aged 75.
Lynne married Bert Palmer (who also appeared in Corrie in 1965 as Mr Hartley; and in 1973 as Walter Biddulph, who sold his newsagents ‘Biddulphs’ to Len Fairclough who renamed it ‘The Kabin’) in 1934 and she was widowed in 1980. They had two children: a son and a daughter.
Did you ever see or meet Lynne Carol? Were you outraged when she was sacked? Do you have any trivia about her?
Research from Wikipedia, Corriepedia and IMDB.

Martha was a superb character and the show was never as good without her! RIP Lynne, gone but never fogotten!