Gary and Izzy are both broken hearted apart. Even Owen knows Gary loves Izzy and she broke up with him for the wrong reasons. And for all he was against her and Gary being together, he was the instigator in getting them back together.  Owen has pledged to pay the cost to give them what they want and it's thanks to Tina making the suggestion that he investigate the options. At least Gary and Izzy are back together. Tina made a joke about having the baby for them instead but it's sowed the seed. Pun intended. 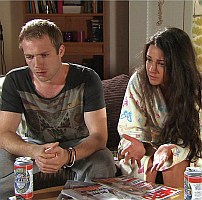 Tommy is promising that everything is going to change and they're going to make it work. So she turns around and decides to have someone else's baby. The words Lead and Balloon come to mind. And she probably panicked when Tommy mentioned she'd be better off without him, shades of Joe's desperation.  I can see why she would want to, for cash to pay off the debt but i can't help thinking it's going to cause more trouble. And 15 thousand? That's on top of the fee for the fertility treatment, about 7 grand PER TREATMENT if the first one doesn't take. and Gary of course was all over it the instant he heard it.

So it's going to be Tina carrying the baby and Tommy's in a snit in spite of the fact that it's HIS debt she's trying to wipe out. I think half of it is because he heard the news from Faye not Tina.

Izzy isn't sure that Tina isn't a bit unstable. She seems to be by all accounts but that's because it's a case of crying wolf. All the problems she's had with Kirsty she really has had and she's telling the truth but nobody believes her. Tommy got to stew in his juices all afternoon, no wonder he had himself worked up into a frazzle by the time he went to confront Tina in the pub and then went to the Windasses to say he wasn't having it. He's hugely guilty at her bailing him out and he's dead set against it. He'll even let it break them up. Gary of course, is too single minded and is going to be determined to talk him round. But really. Is Tommy being unreasonable? Maybe  but the fact remains that he really doesn't want her to do this and maybe she should rethink it if it means that much to him instead of stropping and having at tempter tantrum. She wants to get them out of debt but it's technically his debt.

Owen is going to go bankrupt with the money he's going to be paying out and what if it doesn't work the first time? I still don't think this surrogacy isn't going to work. I think Owen's going to run out of cash.

Tina has officially lost all my sympathy. Full Stop. If she's doing this for the money, and Rita is offering her a loan, why would she not take it rather than go through a pregnancy. It's not as if Izzy is her sister or her best friend ever. Tommy really took against the whole idea. I can't decide whether he's being far too sensitive and overreactive or if he's got a point. A couple should really be on the same side in this sort of thing and if one is and one isn't, it's going to cause this kind of trouble. 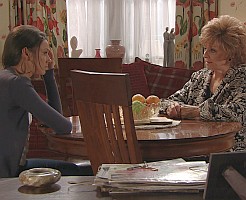 Rita burst into tears hearing the truth. So did Tommy, telling her. It seems a bit of an overreaction on her part, shocking though it is. I can't get over it. It really doesn't seem like something Rita should get so overwrought about? Angry? Yes. A bit upset. But heartbroken and in puddles of tears? Tommy decided to leave (I knew he wouldn't, he didn't leave in a taxi!). They're always leaving each other. Have you  noticed? And they always get back together. And he does seem to come across as a bit of a sniveller sometimes. Owen made him feel even less of a man, forget the guilt he was having already. Man up and do your duty? I dunno. He really objects. So why should he put up with it? Because it's his debt she's doing it for, that's why.

Tina has spent almost no time behind the bar in the last few episodes! Oh and no matter what Rita said, Tommy wasn't actually selling drugs. If he was, he might have made a bit of money and not been in such a bad state.

Meanwhile Kirsty never fails to take any opportunity to be bitchy within earshot of Tommy or Tina. She really is a cow. New baby has a name. Ruby! I hope she doesn't take her love to town! ;) Couldn't resist. Hope she doesn't grow a tache like Kirk's old auntie either. What a way to bring someone's excitement down a peg or two! 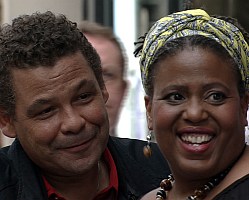 Lloyd won big on the horses but couldn't find anyone to celebrate with and Paul felt sorry for him and got side tracked in the pub with him instead of making a nice meal. He still feels a bit at loose ends, you can tell. Lloyd has been drifting since Cheryl left and doesn't seem to have a lot of focus in his life. But at a reunion gig, he finds a familiar face, an old girlfriend, Mandy. She seems nice. But Ahh. turns out they had an affair while she was married and he considers her the love of his life. Afterwards, Lloyd didn't think he would ever see Mandy again. Virtually guaranteeing he would. Lost bracelet, which didn't look like it had a clasp that was open so do we think she dropped it on purpose? Possibly but then her reaction to him showing up was kind of cold. Maybe she feels like he's stalking her! You could make a case for it. I do like Mandy's wardrobe. 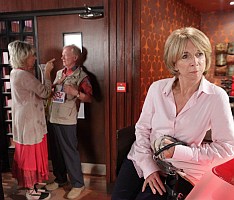 Gloria is sponging off Leanne and Nick now but Leanne is going to get to the end of her tether pretty quick. Gloria's method of picking horses ....  close your eyes and stab the form. Was it the gift or was it blind luck that the horse won? Pretty much a stab in the dark because although Lloyd's horse won, Kirk's didn't.  Gloria and Gail have met and clashed just like Gloria clashes with everyone else. Well i say everyone but it seems to be just the women doesn't it? Gloria's fella showed up, he being the one that got into trouble causing Gloria to go on the run but she's not having him. He's practically on his knees begging. I wonder if there's more to this than meets the eye.

Gail was certainly pleased to make Cliff's acquaintance. Took the opportunity to move in and find out more about her erstwhile rival. Like, she's destitute. Like, she's lied about running a bar in Spain, she worked in a dry cleaner and might have been responsible for a fire. She wasted no time throwing it back in Gloria's face, too, so Gloria pleaded and made a big meal of it and managed to get Gail's sympathy. Wonderful!!  I think Gail needs a mate. Gloria just might be the perfect fit. Gloria's back to her old tricks and now she's got her eye on a pub of the year contest. 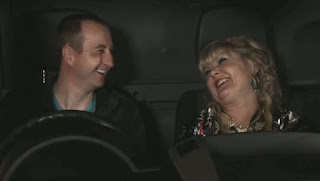 Beth is looking for love in all the wrong places and Julie and Fiz reckon Kirk fancies her. She doesn't have any time for him and was very condescending to his two former girlfriends but she doesn't know what she's missing. He'd treat her like gold, would Kirk.Beth tried out internet dating and it went very badly wrong.  Kirk must fancy her, though, he's actually complimenting her and he followed her on her date to make sure she would be ok, meeting a stranger. She looked really nice but the fella was a right plonker and nothing like the photo he'd sent her.  Luckily her white knight in the white van was there to oversee and pick up the pieces. Kirk and Beth! It's got potential! They're close in age, and Kirk could get to be a big brother to Craig!

Good god. Faye comes home from school and choir practice, it's still light out and she's told to get her pyjamas on? Gloria, while i do like her, needs to learn to back off flirting with married and attached men. Hands off Dennis, Laydeh! Well now she's got a new quest, a local pub of the year contest. I smell a disaster in the making.

Karl is still laying around and Sunita still doesn't have a job. But Anna left Dev's employ and he... gave her a job in the shop? Really?  After everything that's happened? I truly don't believe that would happen unless he's thinking he might be able to break them up and get her back. I don't believe Dev would walk into his own house and shake Karl's hand like they were old mates either. Who are you and what have you done with Dev? Did Dev just want her to work there so he could be nasty and unkind? If he's working there with her, why does he need her there? Usually there's only one person working at a time anyway isn't there?