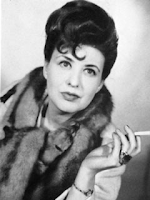 First appeared: 9th December 1960
Last appeared: 4th January 1984
Pat Phoenix played the role of street siren Elsie Tanner/Howard/Tanner between 1960 and 1973 and then from 1976 until 1984.
Born in Mancester in 1923, Pat would appear regularly on the BBC’s Children’s Hour in the 1930s. Phoenix initially worked at a gas department in Manchester and would attend amateur dramatics in her free time. She joined the Arts Theatre of Manchester and would star in repertory works. She made her break in 1948 in film Cup-Tie Honeymoon alongside Sandy Powell and future Corrie co-star Bernard Youens (Stan Ogden). For the remainder of the 1940s and 1950s she would only star in theatre works with the likes of Thora Hird and Harry Worth.
But in the late 1960 her fortunes changed as she was cast to play the role of 37 year old femme fatale divorcee Elsie Tanner in new drama serial Coronation Street. Debuting in the first episode, Elsie was indeed the star of the show for many years and, alongside the characters of Ena Sharples and Annie Walker, was the original soap strong woman. During her first stint on the cobbles (1960-1973), Elsie’s storylines included sparring with battleaxe Ena Sharples and busybody Hilda Ogden; divorcing first hubby Arnold; having twelve liaisons; rekindling with old flame Steve Tanner (he was given the same surname as Elsie due to her popularity) and marrying him in 1967 but the marriage ended in 1968 when Steve was murdered by Joe Donnelli – the marriage had already soured anyway; and marrying Alan Howard in 1970 but the marriage was tempestuous due to Alan’s money problems and alcoholism. Elsie became a popular character and made Phoenix a household name. A fiery redhead, she held various jobs in her first stint, working in clothes shops, a florist, a launderette, managing a hair salon and was a warehouse supervisor.
By 1973, Phoenix had become bored with the role and sought a return to the stage and left unannounced. But her role as Elsie proved a burden to her as she suffered from being typecast. Her only TV appearance was in Charles Dickens’ World of Christmas in 1974. Her sudden departure from Coronation Street provided a challenge to producers – this was evidence that no character could last forever. Add to this the long absence of Violet Carson over the same period and they faced a conundrum. The programme suffered with a dip in ratings as many saw Elsie’s departure as an end of an era.
But in 1976, with new producer Bill Podmore at the helm, Phoenix begged to return to the show. Over time the ratings rose and with Phoenix back and Violet Carson making more regular appearances it seemed that the serial was getting back on track. Thus began a so called golden age. During her second stint Elsie’s storylines included seven romances; taking in lodgers; and divorcing Alan. She found employment at Mike Baldwin’s new denim factory as a supervisor. She left the factory and worked at Jim’s Café before returning to the factory as a machinist. During her second stint, Phoenix often clashed with producers over the fact that Elsie’s men were in their 60s and that it gave her an ageing image. In 1983, Phoenix once again decided to depart the programme but gave enough notice so that Elsie could have a dignified exit. Elsie made her final appearance in January 1984, doing a midnight flit to Portugal with old flame Bill Gregory. It was revealed in 2011 that Elsie had died in a car accident in Portugal in 2004. Over the 20 years she was in Coronation Street, Phoenix appeared in 1631 episodes. During the 1960s, she was second only to Doris Speed (Annie Walker) as the one who made the most appearances. Following her departure she starred in Constant Hot Water (1986) and Unnatural Causes (1986). That year it was announced that she was diagnosed with lung cancer. A lifelong smoker, she quickly deteriorated and passed away aged 62 in Cheadle, Greater Manchester.
Pat was thrice married: to Peter Marsh (1953-1961), Alan Browning (1972-1979) and Tony Booth (1986). Browning played her on-screen hubby Alan Howard and they fell in love on set. She had had a fling with Booth in the 1950s and they rekindled their romance in 1980 and they married when Phoenix was on her deathbed.
Did you ever see or meet Pat Phoenix? Do you have any pieces of trivia about her?
Research from Corriepedia, Wikipedia, IMDB and 40 years of Coronation Street by Daran Little.
Follow the Bluenose CorrieBlog on Twitter and Facebook
Posted by Tvor at 11:59