Green Eyed Monster award: Peter. He got what he wanted in the end though.

Worst Idea Ever: Deirdre hates Rob. So of course Tracy wants to move him in!

Time Warp award: From when Carla gave Roy the keys and sent him off to get his bag, there was time enough for Peter and Tina to go through round two, get dressed again, for Tina to sort out her hair and for Hayley to wake up and have a proper conversation with Carla.

Both Barrels award: Not only did Rob and Tracy do some prime cooking for Deirdre but they brought her a free telly from the shop.

Mad Cow award: Tracy trying to frighten her mother into letting Rob move in.
Runner up, Liz roughing Peter up in the Gents'! Wonderful stuff from writer Mark Wadlow!

I want one of those award: Tea towel... Keep Calm and Kill Zombies!

Doctor Who reference: Roy's brain really is like a TARDIS! 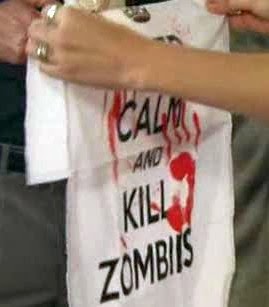 Appropriate image: Carla as Medusa. Yes, I can see it.


Lines of the week:
Deirdre "...without you shoving yer sexuality in me face while I'm eating me boiled egg"
Maddie "If it isn't Saint Sophie"
Carla "Why can't everyone just get on?" Peter "Drop the hippie act, it don't suit ya"
Deirdre about Rob in his pants "I've seen better. But...I've seen a lot worse!"
Tracy "Most parents would be chuffed to bits that their offspring wanted to hang out with them" Deirdre "Most parents don't have offspring like you!" (Whoah, the worm has turned!)
Carla "Do I look like I take sugar, Roy?" and about a quiet new year "saves waking up in a puddle of your own regret"
Tina "What've we done?" (and you've done it twice)
Deirdre "All this is outweighed by one simple fact. I don't like him"
Tina "I hate women who sleep with married men"
Eileen "Any self respecting flea would have bogged off to warmer climes"
Hayley "I won't see the daffodils or the poppies but I'll still smell the roses"
Jason "Cheer up, you never know what's round the corner" Sean "That's what worries me, J-boy!"
Kylie "One door gets slammed in your face, another one gets kicked in. That's just the way the mop flops"
Tina "Unless we've got a future, take your hand off my face" Peter "Depends on what you mean by future" (and that in a nutshell is a typical married man's response.)

Nick has the skinniest legs I've ever seen. Can't figure out how they hold him up.