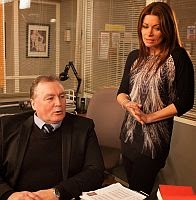 Peter's preoccupied all right and Tina's avoiding him and he doesn't want her to leave Weatherfield so he promises to stay out of her way. Really. He promises. From inches away. Playing doctor. All the while blowing off a client. Fail! He lied to Carla and Tina was shocked just how easy he did it. Mark of an experienced cheater, luv, because Peter's a very good liar, not just because of the cheating but because of the alcoholism. But he's not perfect. Guess what, Peter, the client is in the office. So much for that lie. Best way to handle it? Pile on another one and pretend you've been craving a drink. Talk about putting the fear of the Gods into her. Oh he's good. And Tina found out about that lie, too. Carla is in bits and worried about Peter on top of it. Even more reason for Tina to want to leave but there's a condition. He has to come clean to Carla. You know that's not gonna happen.

Liz is right. Peter is a classic cheating man that wants the best of both ways. Tina really believes that Peter loves her. Liz knows he doesn't. Peter proved it and told her plain out. She asked if she should stay. For him was strongly implied. What did he do? Turn and walk away, or tried to. He had to be honest with her. He really does love Carla, not her. He never intended it to be a grand love affair and now that she's making noises about the L word he's done. Running for the hills which have a hotel with five stars and a spa. 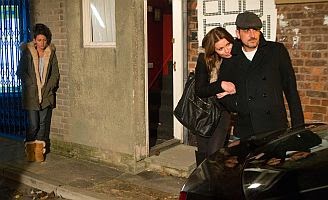 So that's what Tina did too after a quiet goodbye to little Jake though she couldn't face Rita. Of course she's fine for money, she's still got all that cash from Owen. So she's gone. But I think she'll be back and if soap opera cliches are anything to go by, she will probably come back pregnant. Just speculating.  Tina hasn't told anyone that she's gone. Probably not even given Owen back the keys. Carla is shocked but respects her for it. Peter's just shocked. Rita's hurt and confused. Can't blame her. Liz and Peter know darn well why Tina left. Peter got more and more agitated every time her name was mentioned, trying desperately to pretend he wasn't bothered until he couldn't stand it any longer and had to ask Liz if Tina mentioned his name. I totally love it that Liz takes no prisoners and puts people like Peter in their place.

Peter not only inherited his father's loose morals, he's inherited a very keen lying gene. He's smooth, isn't he? Poor Simon was gutted. Problem is, when you tell a lie, you're bound to be caught out. Carla has decided that Rob is the reason Tina left and if not, there has to be a bloke involved somewhere (and she's sitting right beside him!) 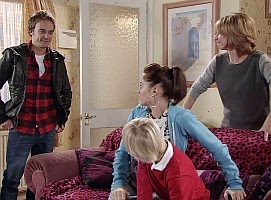 I thought David would have moved in straight away from last week's reconciliation but Kylie didn't want to rush it at the time. Sensible, really but in the face of little Max, she gave in. Did Leanne sack Kylie in the end? I guess she must have because David wants Audrey to give Kylie her job back and so she did and even though Kylie figured it out, she's loved up so it's ok. Kylie's pulling herself together but not without a lingering doubt or two. Loved David and Kylie listing Gail's pros and cons!  David knew Gail would find the pro/con list. She wasn't nearly as insulted as i though she'd be and Audrey just found it highly amusing.  but making her own list? She hardly came up with anything all that scathing, did she?

Michelle is finding smells annoying and she's bitchier than usual. She's tired and has put on a bit of weight and Maria's suggestion that there might be a particular reason struck home. Is she pregnant? Liz hopes so. But, No, Michelle isn't pregnant after all but Liz let the cat out of the bag before she knew for sure. Poor Steve, hopes up high and then dashed again after Michelle decided to string him along a bit first. I can see why she'd be reluctant, with a 20 year old son, you wouldn't likely want to start all over again. 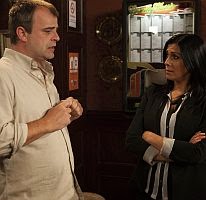 So Michelle is ticked off that Steve told his friends and is unbending in his refusal to have a vasectomy. How is that different from her telling her friends like Maria and being unbending in not having a baby? Steve really would love to have more kids so it's not really fair to insist he have a vasectomy. Loved Lloyd and Eileen taking the micky, lots of snip and chop puns. Even Andrea got on the bandwagon but she's right, he shouldn't do it if he really doesn't want it. I'll tell you what.. Michelle's been continually bitchy about Steve talking to his friends, Andrea in particular, and she's mighty jealous of Andrea. She might want to rethink that "no sex" thing. Can't blame Steve for being angry, you can't be using sex as a weapon.

Liz might have caught the bitchiness from Michelle. She was uncalled for rude to Andrea. And Andrea clearly has a shine for Lloyd. I think they'd make a nice couple. Lloyd is dancing on air now, after lunch with Andrea. Now...is Steve jealous?

Hurt feelings in the factory when Beth is using "Hayley's" machine. Difficult to see someone else in that chair I guess. I did laugh at Beth though. She didn't mean to come out with what she did the way she did but her crack about making the machine into what amounts to a holy relic was funny. She wasn't very nice to Julie either and Carla tore a strip off her and sacked her for the temper tantrum. Carla might be the boss but Peter's an equal partner. However, he can't really not support her in front of the girls. Beth is trying to get her job back but she's not really putting much into it. Carla called it Gross Misconduct but she seems to be focused on Beth misusing the machine which she didn't really. She gobbed off and instigated, true. I would think that would be a written warning but she's probably had more than one before now. Still, people get sacked from the factory for very little and a tribunal would have a field day.

Carla had a difficult time shoring herself up to see Hayley but put the smile on her face anyway. And Hayley is getting noticeably weaker but Carla can put a smile on Hayley's face. Hayley's pale. No appetite. Can't eat anyway. Fiz had a good idea, get some little treats for Hayley but she was so anxious to go that Tyrone had to do some unexpected takeaway (Roy's pies! Does he make them from scratch? He used to buy them from Fred). She wasn't even able to be tempted by much they brought her except for the strawberries. 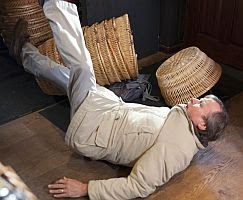 Hayley wants strawberries and strawberries she will have if Roy has his way. Even if she looked at them as if they were chopped liver and I don't think they went down as nicely as the ones the other day. It's so difficult watching Hayley in pain and she's scared that more pain killers will put her right out of it. Nearly broke my heart to see them swaying to The Look of Love.

Roy's solution is to get yet more strawberries but that quickly went off the rails when he couldn't get the precise ones he wanted. I don't know how Roy figures the retailer can provide the fruit when they are clearly out of them and when Tyrone found one last packet, past their sell by date, all reason went out the door. And if there's a reason that Roy slipped beyond just his own two feet, there's more health and safety issues to hold over the shop keeper's head. Roy landed on his back, surrounded by strawberries. He didn't get arrested so that's ok. Roy feels like he's failing Hayley. He's not of course but he wants to make every moment count.

Julie's still wobbling post-Brian which is entirely normal and quite normal for Julie, she's still very emotional and she's making it all about her every chance she gets.Maria and Marcus are back on screen. They do make a nice couple. Now they think they'd like to buy a house. What Audrey has to do with it, why they should even have thought of Audrey's opinion makes no sense. She can always find a new tenant for the flat. Although I do think Audrey had reason to be miffed when Maria out and out lied to her about where she'd gone. It's all about respect. It was more about that then anything. Maria believes that Marcus is committed, now that he's willing to buy a house with her. Sure reason for things to go pear shaped, especially with Todd floating around wanting to cause trouble.

Jason isn't altogether sure it's a good thing his father is around. And Eileen certainly doesn't think it is. Tony's trying, it seems, and he's corralled Eva in to help. Can't blame Jason for being wary. Tony wants to buy Jason a meal at the Bistro on Monday.  Meanwhile, it's Todd's birthday coming up. Monday. I sense a conflict. Well Todd does like a good fireworks display, he just might get them. Stay tuned.  Tony seemed to be giving Liz the glad eye and she was duly flattered.

Todd, at least, felt that Eileen should know Tony's invited to the birthday meal ahead of Tony just showing up. Well, I don't think Todd really thought about it in those terms, he just wanted to stir the pot now. It's fair, though, I'm sure Eileen wouldn't want to see Tony walk up on the night of, not without warning. She's got to do it for Jason's sake. Todd really does have a crush on Todd and Julie can tell.

FINALLY Tracy mentioned something that i've been moaning about for years. She never had to have anyone walk her to school like kids today. Bessie Street is right around the corner practically.