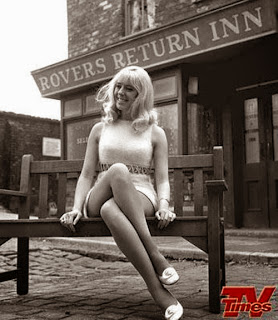 (This post was originally posted by me on the Coronation Street Blog in December 2013.)

While commenting elsewhere this morning and mentioning Eva's qualities, it occurred to me that she's a bit similar to a young Bet Lynch. I know that's kind of sacreligious, comparing a newcomer to a legend - but hear me out.

When Bet first appeared, she was leggy and blonde and gorgeous. She wasn't overly ambitious, was out for a good time, could attract the fellas but she couldn't keep them long. She had opinions and let everyone know it and her temper sometimes got her into trouble. Over time as she became part of the Rovers' fixtures and fittings, it was only logical that she eventually had a shot at being the licensee, which she proceeded to stuff up. Alec Gilroy bailed her out and married her. She pulled herself up a little higher into the respectability cloud with her newfound status but eventually, after Alec left and she ran the pub for a few years on her own, turned on her leopard spotted tail and left. It turned out she wasn't very good at managing the pub and the books showed it. Bet had some street smarts but wasn't at the top of the IQ heap. 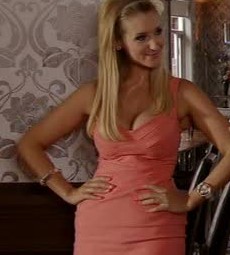 Eva is a leggy, gorgeous blonde. She's not university material but she'll do ok. She can attract fellas but so far, hasn't been able to keep them very long. They have mostly been following "If you can't be with the one you love, love the one you're with" camp, using her until someone better comes along. That might be different with Jason. I think Jason really cares about her for who she is. She's also not a long reach from his most recent ex, Rosie, though I think she's got a few more clues than our Miss Webster.  I think Eva has a touch more glamour about her than Bet as well.

These days, most of the younger actors don't stay in one role for a long time, however, so it's probably a moot point. But in my fantasy world of Corrie speculation, I can see it clearly. She's feisty and ballsy, she's a bit brassy and definitely opinionated. She's a bit too impulsive for her own good and that gets her into hot water at times. She then picks herself, dusts off and keeps going. She's got a romantic side, and would love to be married and raising babies with a really nice fella. Maybe if she gets that, she won't be interested in running the pub and probably she really isn't up to the task even with someone by her side, not if that someone is Jason.

And she's one of those characters most of us can identify with even if we're not leggy blondes. She doesn't really like working in the factory but she'll do it anyway because ... it's a job and she'll do the best she can with it even if stitching doesn't really come naturally. I love it when she messes up due to her own impulsive behaviour. I love her favourite expression, 'piggin' which she spits out when she's thoroughly disgusted with something or someone, often herself. I love watching her relationship with Jason growing, clearly she is wearing her heart on her sleeve and secretly "squees" when he shows her how his feelings are growing. It's been interesting to watch her finally find some closeness to Leanne, the sister she didn't know existed. She's got a good heart, she's got a great sense of humour, she's got strength and she's a lot of fun to watch.