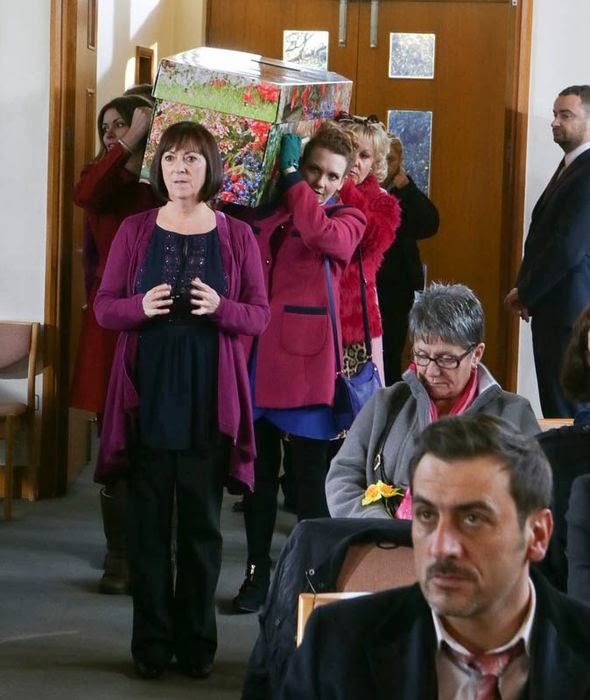 (This post was originally posted by Ruth Owen on the Coronation Street Blog in January 2013.)

As a lifelong Coronation Street fan it was a real joy to hear that my good friend Kate Rutter had succeeded in her audition for the part of Susie, the humanist minister, who will preside over Hayley’s funeral.

Susie first appeared on our screens on Friday 3rd January, when she walked into the café to see Hayley. She introduced herself, and we know from previous comments Hayley has made, that she finds Susie ‘really nice’ and indeed, so she seemed on her first appearance. Susie, of course, will be on screen again for what many are saying will be the most upsetting, convincing and heartbreaking event the soap world has ever seen.  Kate is particularly delighted to have been offered the part of a character who is closely linked with a story of such power and drama, affecting almost all of the characters on the cobbles.

Kate has great admiration for the work of Julie Hesmondhalgh and David Nielsen, as Hayley and Roy respectively. She admires the history of Roy and Hayley’s relationship and adds that both are hard workers, determined to get it right, and are also very warm, welcoming people. In fact, on the topic of being warm and welcoming, Kate was welcomed by all the cast members she came in contact with. It was very interesting to hear that Kate Ford aka Tracy Barlow, is a very warm, witty and kind person, which, of course, means that Kate Ford is a cracking actress.

On the set of Coronation Street, Kate says there is a genuine sense of loss; partly because Hayley is dying but also because Julie is leaving. In discussion about the future of Roy in Coronation Street we speculated as to whether the writers might pair Roy with someone else, and that if they do, they had better not do it too soon after Hayley’s death. We also surmised that Fiz and Tyrone will do all they can for Roy. So many of the characters will feel bereft and her cheerful, positive, no nonsense, heartwarming kindness will be hugely missed.

Kate will of course lead the service for Hayley’s funeral and  said that it was marvellous to be able to play her part to a whole cast. With the possible exception of Tracy Barlow, who, when it was discovered that Hayley was in fact, a transsexual person, who used to be Harold, had nothing but spite, disgust, hatred and scorn to throw at her. No loss for Hayley if Tracy doesn’t turn up, but I have a hunch that she just might.

Kate was full of admiration for the ‘well-oiled’ machine that is at the heart of the smooth running of our favourite soap. Crew, producers, directors, makeup, wardrobe and cast members - all are very well organised and there is a real efficiency about the whole business. Simultaneously there are often three teams filming all with their own crew, director and producer. The sense of ultra efficiency and excellent organization is inescapable, Kate explains.

Kate herself has been an actor for many years. She left her home city of Leeds to train as an actor at Rose Bruford Drama School in Sidcup, Kent and has played many roles since then on stage, in television and in films. In The Full Monty, 1997, Kate played the part of the dole clerk who asked Horse, ’Have you been seeking work in the last fortnight? Have you done any work, paid or unpaid in the last fortnight?’ To these questions Horse replies, no. Kate’s character then looks at him, over the top of her glasses and says, ‘That’s not what I’ve heard.’ It’s a delightful piece of acting.

Kate also appeared in the film Oranges and Sunshine along with Emily Watson. Kate played the part of Vera Wilson, a woman whose child was sent to Australia with many others. Kate’s most recent television work was as Doctor Miriam Stubbs in BBC Scotland’s soap River City.