And all those cats went scrambling across the cobbles and nobody was fooled. It's the truth and nothing anyone can say will make the gossip stop now including Kylie telling Nick that Leanne was fed up with the stress of dealing with him. Nice. Gail put a good spin on it, just an argument in the car when the crash happened and Kylie's exaggerating but I don't think Sally was fooled. Leanne is exactly the right one to try to talk sense to Kylie, she's made more than a hash up of her life than most as well. I think maybe she did make Kylie see some sense but It probably won't "take" just yet. I don't think Kylie has hit bottom quiet  yet.

Hayley is in more pain sooner than they expected so a scan is in order to check if the chemo is having any effect. They've had a card from Becky. Does she know what's happening with Hayley?

Neither Peter nor Tina trust themselves and he's jealous of Rob and said so, so it's out in the open. Tina keeps saying she doesn't know where she stands with Peter. oh? He should be telling her they don't stand at all other than employer/employee or friends at least but that's not going to happen is it? This is a train crash ready to happen and it's hugely contrived and annoying and the worst part of it is Peter pushing Tina away and then drooling over her at every turn.

Michelle and Liz think Steve is out shopping. He might be but I bet he's got help with his friend Andrea. Only Steve could get stuck in a revolving door for an hour! Well, Andrea showed up and is all matey. Michelle and Liz aren't best pleased and highly suspicious. Ok, Steve exaggerated her looks as not pleasant when she's perfectly pretty but there's no need being rude and curt, arms folded and all sour faces. I'm sure Andrea could feel the temperature drop. I hope she was warmly dressed against the frostbite. Annnnd I was right. Andrea had been shopping with Steve. I'm pretty sure Steve doesn't fancy her, though, and it doesn't look like Andrea fancies Steve but male-female friends can be threatening to partners sometimes and Michelle clearly feels threatened.

Oh i liked the little toy guitar Tyrone bought for Ruby. Nice that they've remembered that Jason and Tyrone are supposed to be good mates. I smiled at them luring Tyrone for another pint, and another... You never see Ty with any of the guys much these days now he's a family  man and running the garage on his own.

Rosie's not coming for Christmas and now Sophie's not going to be there either. She's volunteering at a soup kitchen and she shamed Sally into coming with her! 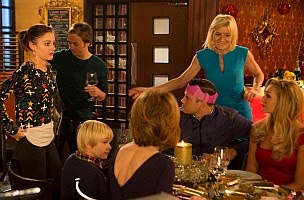 Christmas day dawns on Coronation Street. Leanne remembered David's birthday but Kylie is nowhere to be seen. It's crisis in  Platt Towers yet again. Gail's not bothered that Kylie's done a runner. Less trouble. David found her, though, all by her lonesome by the canal, wisely trying to keep herself away from causing everyone more stress. David really does "get" Kylie. He's been there. It's kind of sad to see how little she thinks of herself these days. David's words might have had some effect though. She did show up, apologetic, but when Nick went off, David was the one this time that hurled insults at her, more or less blaming her for all the trouble.

Nick reckoned the worst was behind him. And then  he slapped Leanne when things got too hectic. Gail and Audrey were on Nick's defensive team but Leanne's mother and Gran were most definitely not. Leanne is still shocked. Will she leave him as she said she always would, should anyone hit her even the once? 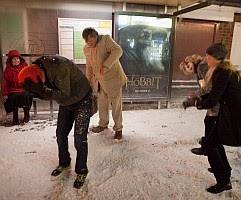 Roy's gift of a tour of Amsterdam on DVD was very thoughtful. They didn't really get the quiet Christmas that they wanted. First the Kabin crew descended. Why did Mary choose then to give Norris that ridiculous anorak with the long snorkel hood? It might be appropriate for our Canadian winters but a bit overkill for Weatherfield. Fiz and family are next. Hayley was definitely tired, you can see it starting to take its toll and she couldn't even walk back to the cafe from the pub without a rest at the bus stop, The pain is getting stronger. The snow is gently falling. Roy is beside himself with worry. Hayley's given him her blessing if he meets someone else. I don't think that could happen. The sadness was broken up by the snowball fight.

Looks like Peter and Carla had a cozy Christmas morning and then she made him an equal partner in the business. Don't think we found out what he bought her. I love that Deidre made pots for everyone and made Carla a gold one and her pots are still just as wonky as they always were. But then Peter had to take a present to Tina from Simon and it all starts all over again.

I really liked Michelle's top even if Andrea was the one that picked it out, contrary to what Steve said. Michelle still would have minded but it was worse because, as always, he lied to her.

Oh look, there's Faye! Not seen her since the Grace disaster.

Sophie dragged Sally to the shelter, kicking and screaming. Once there, she got accused of being smug by a gobby teenager and got her face creamed in the trifle. That Maddie had Sophie wound up and wasn't really very receptive to Sophie's friendly advances. A lot of high walls around that young woman, self-built obviously. Sally's handbag got stolen, well she did leave it up on the countertop out in the open. That puts a damper on the day as well and Tim didn't get the turkey in the oven early enough. She should have set a timer on the oven.

Christmas in the pub had it's ups and downs. Kylie and Tina were at each other's throats and then Tracy had her two cents in and it all turned into a brawl rolling around on the snow. Luckily, the cops saw Kylie take the first swing and she's in the nick. I wonder if Liz sacked Tina for the trouble like she threatened?  Deirdre's weaving around the pub with a mistletoe halo on and wittering on drunkenly, but delightfully. "Come to Deirdre!". Mary singing inappropriate songs.

But later, a proper sing song. Everyone forgives everyone else.  They might think it's the most wonderful time of the year, but it's bittersweet for the Croppers. Wonderful Cropper snow people!! Bitter full stop for David. Not much better for Leanne looking bruised and miserable with Nick looking even more miserable and guilty. Kylie kicking up a storm in a jail cell. Merry flamin' Christmas.

Hayley started off the new day hopeful about the results of the scan, that it would give her a few more months. The Cropper snowmen melted overnight. It must have rained. I don't think Hayley's going to manage to see them daffodils she wants to see.  She got the bad news. The chemo hasn't worked which she probably knew all along and it's spread. It's got to be the worst thing a doctor has to tell a patient.

Hopes crushed for the Croppers and we've only got Hayley for a few more weeks. That false optimism was a front for Hayley and she finally broke down in tears and anger (GULP). She's usually the one that accuses Roy of burying his feelings and she has been doing the same thing.I did enjoy her giving Kylie what for even if it didn't really seem to sink in. It was all so hard to watch, though, and so real.

Kind of surprised that Leanne didn't put loads of makeup over her bruise. Maybe she thought it wouldn't have helped anyway?  Her black eye seemed to get worse and the cheek bruise lighter as the day went on. Nick feels really terrible, full of self doubt and second guessing himself and finding Leanne crying didn't help.

Norris is struggling with that coat but really, it probably wasn't necessary to put the hood up. Nick really didn't need to tell Norris about hitting Leanne. Now the whole neighbourhood will know because he didn't waste any time, did he?

Kylie was released the morning after, looking bruised and pale but she didn't go home either. Looks like Max knew all about the police station and everyone talks trash about Kylie in front of him and he decided the park was more important than finding his mother, which she overheard. Ouch. Wow she apologized to Tina but I tell you one thing, I'd be afraid of Liz if she got on a righteous as threatened those two young women. Even a rant from a dying woman didn't seem to get it through to her. I wonder if it's going to end up being Leanne who pulls Kylie out of it. Leanne, more than anyone in this mess, knows what it's like to mess up really badly and knows that you can pull yourself up from the gutter filled with self loathing.

Over at the pub, a darts match is ongoing with fierce competition. While Steve seems to think Andrea is nice looking, Lloyd is the one that really fancies her but Michelle is just jealous and miserable. New green top was appropriate.

Sophie found Maddie who was hugely defensive and it was clear she really did take Sally's handbag. Sophie's still sympathetic but Sally's all for informing the police which is probably what should happen.