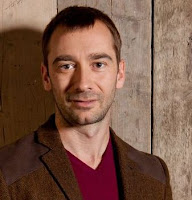 Charlie Condou was in Toronto this past weekend making an appearance at the British Isles Show and he was interviewed on Toronto's City News yesterday. There's a video clip of it here.

He tells the interviewer that he doesn't know how the M&M affair will end but says there are some "big dramas" coming up and they revolve around the fact that Marcus is gay. He says that the support for the storyline has overall been positive and most of the objections have come from the gay community but it's absolutely not about someone who was gay being "switched" by the love of a good woman. It's about how sexuality can become blurred or confused sometimes.

The interview is great and Charlie is very well spoken and a wonderful advocate for Coronation Street! If you're in the Toronto region this weekend, visit the British Isles show and you might get to meet him! The schedule and further details is here.