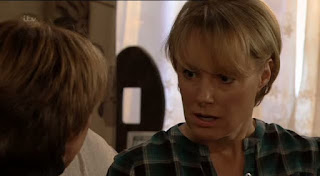 Cruise Control award: Sylvia's an expert, right down to wearing loose clothing due to all the lushous food!

Eva about Gloria "What if she finds out she's not in the will? Then we'll see what grieving is"

Don't Tie that Yellow Ribbon award: Tyrone is martyring himself. He doesn't think he's got a tinker's chance of getting out and sacrifices Fiz instead.

Sucker award: Lloyd had to give the not-dead  Flash a funeral and then had to apologize to him as well! 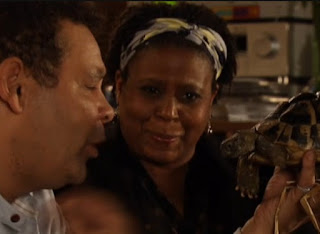 Hoping against hope award: Karl is taking every inch Stella will give, hoping he can worm his way back in.

Dream come true award: A group of firemen doing a Full Monty? I'm SO there! And I enjoyed the puns. Bottoms Up! Beat around the bush!

Two faced gold digger award: Gloria. Only the thought of public humiliation turned her around.

Odd funeral music: "We Built This City on Rock and Roll" as the coffin is rolling away

Fatherhood Fail: Sorry Tim, if you want to get to know your kid and be a dad, you can't just do it when it's convenient. 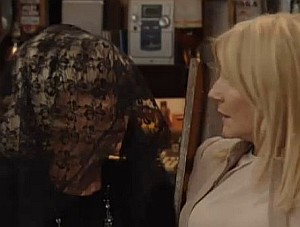 Lines of the week:
Gail to Kylie "You're not scared. You're unstable"
Eva "I listen to Eric. I don't just hear white noise and use him as a cashpoint" (She's got a point)
and "I have been cheated on more times than i've had my nails done"
Mary about Eric "Brooding. Like an octegenarian Mr. Darcy"
Michelle "Why can't blokes just be honest" (you're with Steve. You tell me)
Sally to Gail "If you keep the secret, you keep them (her family)"
Gail to David "It's because I respect you that I'm leaving" (No, it's because you're afraid he'll chuck you down the stairs again)
Katy "Sorry I'm late. Ryan had things to show me" (Did he ever!)
Gloria "I could've sorted him a quickie divorce. I mean, they do them in Tesco's now don't they...?" Karl "You're thinking of travel insurance"
Eileen "I never run, not even for a bus"
Eva about Gloria "From grieving widow to glamourous grannie in one easy step"
Gloria "May he rest in peace" Doris "At least until I get there"
Doris "He's lucky I don't stick him in a binbag and put him out for the dustmen"
Eileen to Sean "Keep my fella out of your mucky fantasies"
Eileen to Paul "I for one am very proud of you." Tracy "Bottoms up to that!"
Tina about Kirsty's past "That explains, not excuses"
Eileen to Steve "Were you dragged up?" (Liz...Jim... yeah pretty much)