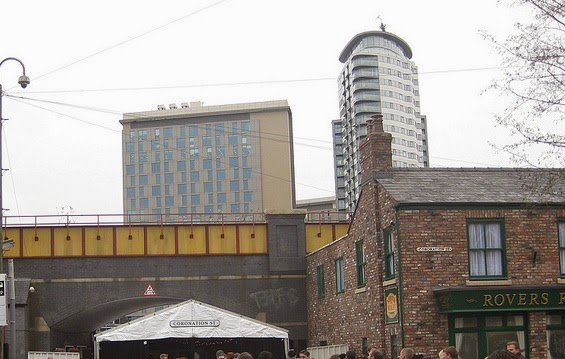 (This post was originally posted by Chewy on the Coronation Street Blog in March 2013.)

One of the big attractions about Coronation Street's new set is that it is no longer surrounded on all sides by towering buildings, giving the show's production team a lot more freedom in how they shoot the show.

Though there is a lot less clutter on the skyline, there are still one or two noticeable outside world structures looking down on the set. These include two skyscrapers across the river from the new set.

I don't think Corrie should avoid showing these buildings, they don't look too out of place for modern day Manchester, they could even be seen as part of Weatherfield Quays, or perhaps just a new development in Weatherfield's town centre.

The show has done this in the past with the Museum of Science and Industry, which is actually Nutall's Brewery in the context of the show, and has followed the Street to its new home. 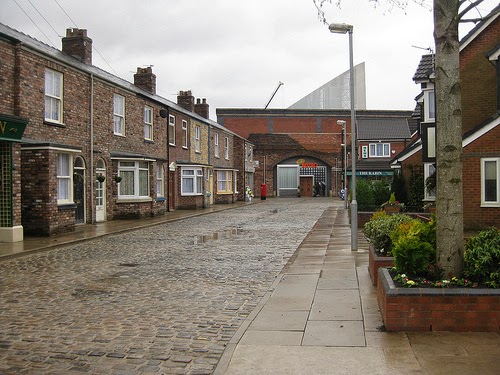 The other change, the top of the Imperial War Museum North, looks a little peculiar, peeking over the wall of the viaduct. This would be quite easy to explain away as a new community centre that has been built on Jubilee Terrace.

I think it would be worth taking the time to address the surrounding buildings, rather than just try and avoid showing them, since Corrie will based in Trafford for a long time to come.