The future of Carla's child 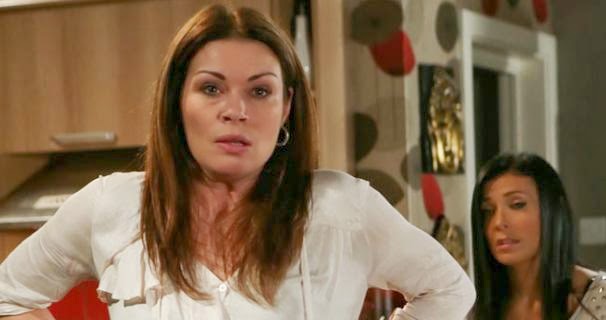 (This post was originally posted by Scott Willison on the Coronation Street Blog in March 2013.)

Carla's finally resolved her Schrodinger's Womb; until last night's episode she was simultaneously pregnant and not pregnant.  Now that we all know, yes, there is a tiny ball of cells gestating inside the fabulous Ms Connor (given the state of her marriage, there's not really much point in calling her Mrs Barlow, is there?) the question becomes: what happens next?

Carla is not maternal.  This has been long established.  She's terrible with Simon, always has been; her idea of parenting is to lump him in front of the X Box with a packet of Frazzles while she thumbs through the fashion mags in the bath.  She doesn't like children.  She had a terrible childhood.  She loves her home comforts.  She is, in short, exactly the wrong kind of person to have a baby.

Babies should be wanted, desired, loved.  In an ideal world every child would be produced from two loving, caring parents who wanted nothing more than to reproduce and who are willing to sacrifice everything for their newborn.  Life isn't like that; life finds a way.  Life creates children out of drunken fumblings, out of unhappy marriages, out of lonely, scared women, and each unloved child is a little story of sadness in itself. 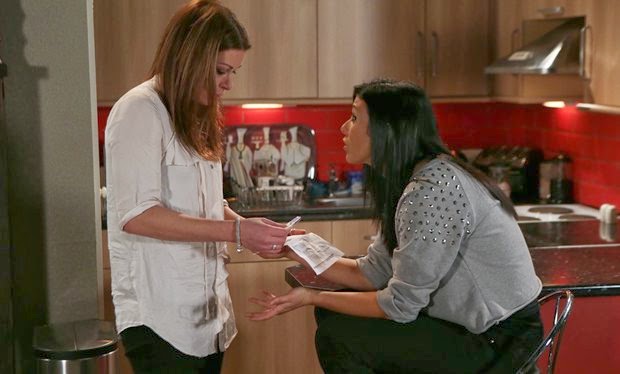 Here's how I'd like Carla's story to develop.  I'd like Carla to feel regret that this has happened, this accident of genetic material (because it was an accident; you can bet your life that she was using contraception of one kind or another).  I'd like her to experience sadness that this decision, this huge, momentous, life altering decision, has been thrust upon her.  And then I'd like her to get an abortion.

Abortions don't really happen in soap operas.  This is mainly because they are a neat, catch all answer that solves a lot of problems, and a problem means a drama.  If a character in a soap opera finds out she's pregnant, she usually persists with the baby, even if she's not sure who the father is (Molly), or she's only known the father for five minutes (Kirsty), or she's pretty sure the relationship is doomed because he's in love with his former sister in law (Maria), or she's had a one night stand that pretty much everyone regrets (Tracy).  SurpriseChild! is a classic soap opera trope and creates years of drama.

When terminations do appear, it's often as a storytelling device, nothing more.  Think of Katie loitering outside the hospital, waiting to see if Chesney really loves her and will come and save her.  His arrival, and her subsequent decision to give birth, was a "romantic triumph" - even if two teenagers having a baby is rarely a good idea, and they've subsequently split up.  Alternatively, there's Tina aborting David's baby; in this instance, a teenage mother was a bad thing because that way David could go off the deep end and be even more psychotic than usual.  Tina was pretty much forgotten after he chucked Gail down the stairs. 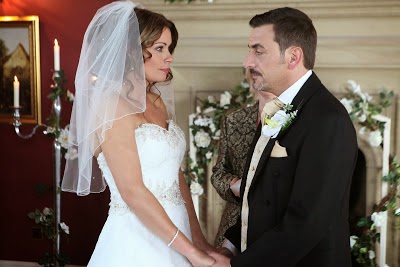 I'd like Carla to make a careful, intelligent, logical decision.  I'd like her to decide that there are too many unloved, unwanted children in the world.  I'd like her to explain to Peter that she wasn't ready to devote the rest of her life to a baby she didn't ask for; I'd like him to support her and her decision.  I'd like her friends and family to hold her hand and look after her while she undergoes the procedure. I'd like her to say goodbye to what could have been, and then look forward to the wonderful life she can live without the stresses and pain of a burdensome child with her.  I'd like the abortion to be presented as a positive in the life of a woman who knows what she wants and what will make her happy.

It's a side of terminations that's rarely presented; women in dramas who have abortions are usually shown to be a bit mad, full of regret, sad at what could have been.  I've known a few women who've had terminations, and in every instance, their life is so much better now than it would have been with a child they didn't want.  Soap operas so often talk about "dealing with issues"; how about we deal with an issue where a woman makes a decision to be happy?  It would be a refreshing, adult decision to show something that happens to thousands of women in this country but is rarely talked about, and to not suggest it's a cause of shame or disgust.  It might not be as dramatic, but life isn't sometimes.  Sometimes a soap opera can simply reflect life as it is.