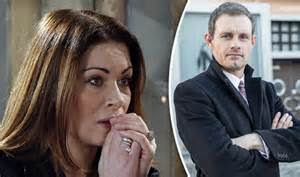 (This post was originally posted by Ruth Owen on the Coronation Street Blog in May 2016, reposted to this blog with permission.)


Ben Price, who plays Nick Tilsley, makes no secret of how much he enjoys being part of  Coronation Street, also known as 'The Rolls Royce of its Genre' - with thanks to Tristan Gemmill - who plays Robert, for that excellent assessment. You can read my interview with Tristan here.

Ben spoke of how much he and Alison King, Carla, enjoy working together and how much they will miss each other when Carla Connor exits the cobbles. The two actors are great friends, both confessing how much they will miss each other, and also admitting that the people in the show are like family to them. This isn't the first time I have heard cast members make this claim and so it certainly rings true. As a fan it is somehow comforting to know that there is such warmth, affection and friendship between cast and crew.

One very thoughtful point that Ben made was that often, when an actor is on the point of leaving the show, the acting performances become super charged. Emotions are running high both on and off the set and as a result the drama is the beneficiary of these  additional aspects. So, as Ben stated, it follows that Carla's exit storyline has been extremely demanding with actors giving their all, resulting in both Ben and Alison, unsurprisingly, feeling 'shattered'.

Following on from Tracy's revelations about Carla, Nick claims to be 'beyond Robert' - that act of betrayal he can forgive her for, However, it is  the other behind the scenes wheeling and dealing in which Carla has been involved, that Nick finds devastating. He cannot comprehend why she has lied to him about the bistro and the fact that it was her, Carla, who gave the money to Tracy to give to Robert, so that Robert could secure the bistro, As we will see in forthcoming episodes,Nick finds it so overwhelmingly difficult to look into Carla's eyes, to hear her voice and to believe that what she says is true and not just another lie. Powerful scenes to come!

If Nick loses Carla, that loss will add to the loss of the bistro, the loss of the move to Devon, the loss of the restaurant in Devon and effectively all that Nick and Carla had hoped for in their lives together. Nick's doubts are also tied up with the belief that he is too dull for Carla, compared to the other men who have been in her life

Whether or not Nick and Carla get married and stay together, there will always be one woman devoted to Nick - Gail of course. He is her first born and she tells him of the special bond between them. During the 'will they, won't they?' of the wedding, Gail takes it upon herself, to give Carla a stinging slap to her face. (We were assured the slap is not real, though it does look pretty convincing!) 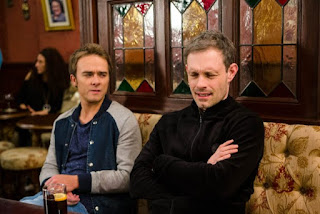 Ben spoke of his on-screen relationship with brother David and how the relationship, with its twists and turns is one of the strengths of the show. He also pointed out that in general, if one of the brothers seems to be on the up, the other one is heading downwards. Interestingly, it is usually Nick who occupies the high moral ground. In one powerful scene we see David remind Nick that though Carla did commit an act of reckless infidelity, he too did commit an act of infidelity by sleeping with Kylie, his brother's partner. Thus Nick has to vacate the moral high ground, at least for a while.

Will this timely reminder have the desired effect and urge Nick to marry Carla? Well it is possible, as Ben did tell us that, as mentioned above, he is 'beyond Robert.' It is likely then that it is Carla's other dealings that will be the decisive aspects of Nick's decision to marry or not, the woman he loves.