We move ahead with the after effects of the events of last week. 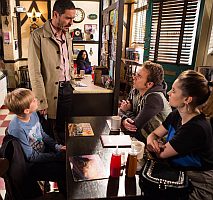 The gossips have forgotten about Carla and Nick and have jumped right into a much juicier murder. Who killed Callum? Those on the street with an opinion seem to think David did it. All of the Platts are arrested on suspicion and all are questioned. The police seem to be most interested in David as well, gearing much of the questioning of all of them in his general direction. David stays cool and collected, even glib at times, admitting he's glad Callum is dead but it doesn't mean he killed him. Finally, when pressed as to who else would have access to their house and a grudge against Callum, David takes a drink to stall for time and comes out with a name. Jason Grimshaw. Well, it's true that Jason did have a grudge, we know that. That big plop you just heard was the sound of Jason being dropped in it.

But David and Kylie are anxious to find out what Gail and Sarah told the police, first and David isn't all that happy that his mother assumes the police will think he did it since he's the only man in the house. I think it's more that his history with Callum that made the police suspcious. 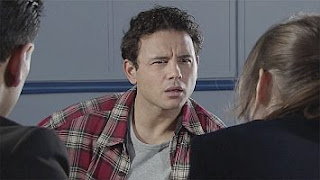 And Jason is not best pleased, is he? The police have come for him next. Gemma is fierce and whoever did do it is going to have to answer to her. Finding out that David probably shopped Jason in didn't please Kylie, up to his old tricks again, isn't he? From the police perspective, Jason has every bit as much motive and opportunity, one more candidate to muddy the waters. He's not happy and the clan confrontation on the cobbles was inevitable. Jason's really worried he's going to get done for the murder.

Sarah can't handle it if Jason gets charged. Jason gives Sarah a hard time when it was actually David that did the deed and with Todd on Sarah's case, too, she's buckling under pressure and thinks she sees Callum's ghost around every corner. Todd doesn't want the news that he and Tony burned Callum's car to get out and doesn't want Jason to shoot himself in the foot by freaking out so he'll deal with Sarah. Todd's trying to get on Billy's side and find out what Billy knows about Sarah's state of mind. Billy did admit he knows Sarah was afraid of Callum but Todd jumped pretty quickly to put theories in Billy's mouth. Anything to make sure Jason doesn't get convicted of doing something he didn't do. Sarah's really losing it and that's not a good thing. She could say or do anything. 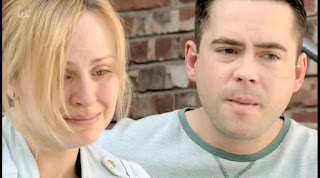 So will Todd, anything to get Jason out of it. Todd does care for Sarah, just the same and finally persuaded her to talk to him. She slipped and told Todd she saw Callum dead and then started to break down. She can't hold it in anymore. She blames herself and told Todd that Callum attacked her and it would sound to anyone that she was the one that killed Callum. In a way, it could be her fault for contacting Callum in the first place but she didn't actually do the deed.

Will Todd use that to get Jason off? Billy found him in a state. Todd really does believe Sarah was the one and he told Billy. In confidence. Billy was shocked! He admitted to Todd that he thought Sarah might have been raped but is second guessing his assumptions. And I don't think David believed Sarah and Todd were talking about their dead son. Todd isn't going to let Sarah be done for murder but doesn't want Jason to be either. He'll come up with something, though, he's good at that. He's dragged Billy into this as well. 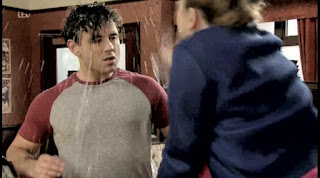 Meanwhile, Gemma is devastated over Callum's death and she's on the warpath and if it wasn't David, she believes it's Jason that did it and he ended up wearing the traditional pint over the head.

Bethany has turned sweet 16! She's organizing her own party and all of a sudden she's got all these people that want to come! And someone's sending her anonymous birthday gifts. Now who can that be? We don't know but Sarah is really getting over protective, worried about everything and everyone. There really was a party and there really were guests who gave Bethany presents and everything. So...no more bullying?

The Nazirs are going away and leaving Phelan to work on her Orangerie. Zeedan is going to have the house more or less to himself so naturally he's going to invite Rana over even though he's not going to have her stay overnight. He's got principles! I don't know why she stays with him if they want different things and she doesn't either. Looks like he's been dumped again. How long will he be able to hold out or will he marry her first? Mind you, I don't think she'd marry him but I think he's probably going to ask.

Johnny is miserable and missing Carla. They can't access the payroll because she's password protected it and they can't get hold of her. What do you suppose the password turned out to be? #blessed. Really. Beth is invited to a school reunion. Izzy has a court hearing to enter her plea and is attempting to plead not guilty. 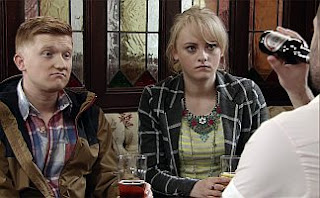 Chesney is now back from one of the longest holidays ever. Sinead is glad and turns down a modelling job to spend the day with him. It wasn't just her, either, Chesney wanted her to as well. But as soon as he spies Gemma who's quite upset about Callum, he goes running off to the kebab shop to help her get settled in at work and support her, much to Sinead's annoyance. Later, when Sinead comes to the shop she sees them having a laugh and spins on a heel. She's sure she's going to be dumped and drags Fiz to the pub for copious amounts of alcohol, totally insensitive to Gemma's grief, and then later, attempting to kiss Aiden which is instantly mortifying for both of them. eek! She can't hold her booze very well, can she? So that's the second "illegal" kiss we've seen, after Michelle and Will which, to be fair, went a bit further than a sloppy drunken attempt.

But Eva got the truth out of Aidan and wasted no time embarassing Sinead and telling Chesney what happened. Seemed kind of mean, really, since it was hardly even close to an affair and I'm quite sure Eva has done some pretty stupid things in a similar vein before. Surely she should be sympathetic rather than horrible and naturally, Chesney's got the wrong end of the stick and overreacted. Beth overheard them fighting and decided to try to get them to make up. They ended up talking it through but didn't get too far. Let's not forget that Chesney broke up with Katy over a kiss and accused her of an affair that hadn't happened at all. And Gemma's there needing someone to comfort her. Sinead better watch out. She told Chesney he could kiss someone. He did, but only on the cheek and then made up with Sinead. 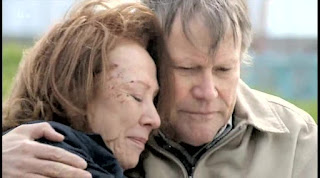 Roy brings Cathy home but avoids her by staying out doing errands most of the day. Cathy tells Anna about the proposal and Roy's non-answer but Anna is sure Roy cares very much about her. Later when Roy comes back, Anna gives him a bit of an ear bashing about giving Cathy the right answer, as she's the best thing that's happened to him in ages. Will he? Of course he will. They had a lovely talk and they're properly engaged. Ring and all, after Roy ends up not knuckling under to his mother's manipulations to come back to her side. Sylvia only wanted an ally when she fell out with her sister, as Roy determined.

Norris seems to be about to be ripped off by a con man in his attempt to have some of his roof slates replaced. He insulted Phelan both after Phelan turned down the paltry job of checking for loose slate tiles and Jason for being a murderer and then tried to offer his hand after Jason scolded him. Mary's quite sure the man that later approached Norris about buying the slates is dodgey. If Phelan is anywhere near the equation, my guess is that the man is one of his dodgey mates.

The man has removed all of Norris' slates and promised to pay Norris but drove off, leaving dust in his wake. I don't think we'll see anymore of him and Norris has no roof and Mary has no Camilla cup. Phelan to the rescue. I wonder if the original slates really were worth something? We don't know exactly but Phelan really was in cahoots with Bob/Alistair. Phelan actually sold Norris back the slates he sold to Bob/Alistair and split the difference with his mate. 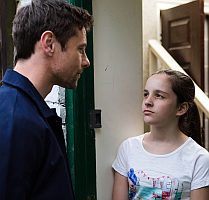 Steve has a broken wing (the actor had an accident in real life). Amy is determined not to go back home with her mother and Steve is on her side. Tracy can't order Amy home nor can she sweet talk her. She's bored but she's not going home. Michelle has a plan to make peace between mother and daughter though she doesn't really think Tracy deserves it. Amy caught on. Fail! She nearly did text her mother again but someone knocked on the door and looky who it was! Will! What on earth does he want? Well, I suppose we can guess. Not what, who! And Michelle's reaction, and Sean and Michelle's conversation has got Amy suspicious. Now she's all moody and distracted again and has Amy to contend with and she'll blackmail Michelle into ensuring she doesn't have to go back home again. She's her mother's daughter, that one.