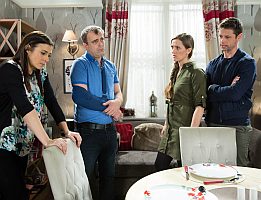 Amy is still refusing to go back to Number 1 and Michelle is on Amy's side lest she tell Steve about Will. The little madam learned blackmail from the master, after all, or mistress as the case may be. Now she's skiving off school and being impertinent and cheeky. She's emotionally holding Michelle hostage. She's really just reacting to what Tracy did and also she's upset about the prospect of what Michelle might have done with Will. Michelle had a momentary lapse of reason with Will but she's over it now. Unfortunately, just when Michelle thought she had everything under control, Will and his ex- and now current fiancee, Saskia, showed up with Saskia shouting the odds and accusing Michelle and Will of having an affair! Uh oh!

Cat is officially out of the bag. Even if it isn't an affair, and only a kiss, Michelle had to confess to it. At least she managed to drop Will back in it again. She reminded him of the affair he had with Becky when they were together the first time around. So why was that different because they weren't married then? It was far worse than that kiss she and Will had and yes, I know, she was nearly to the point of no return and I can't blame Steve for being angry. 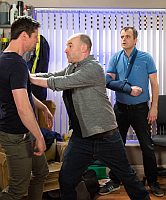 Steve went to the cab office and Tim was in a full righteous over Steve's betrayal and oh look who shows up, Will, a glutton for punishment so Tim had a little wrestle wtih him since Steve couldn't. Michelle now has a new best friend, someone she hasn't spoken to other than in passing, in years. Maria. Michelle is justifying herself but is saying it to the wrong fella and Steve is going to end up feeling like she's blaming him for it all and making it all about her and that's what she did, making herself the victim because Steve left her alone. She needs to accept that she's a grown up and is responsible for her actions.


Steve is more or less giving Michelle the silent treatement. I'd say he overreacted to just one kiss, like Chesney did with Sinead/Aidan, but Michelle was a lot nearer the line to be crossed than Sinead was. Nice to see Tim taking Lloyd's part as confidant for Steve but it isn't helping, especially when a lot of people know his business. He doesn't want to forgive her.

There's a reason fans have been calling her "Mee-chelle" for years. she's still trying to absolve her mistakes by blaming Steve or trying to get him to share the blame. Admitedly, it takes two to make a go of a relationship but she can't blame him for the choices she made. They're bickering and doing it in front of Amy so now Steve finally realizes Amy comes first and should do but Amy overheard Michelle talking to Maria about Steve hiding behind her and took it the wrong way. Poor kid laid it out for Tracy, too, about the years of Tracy fobbing her off on other people but she still isn't ready to forgive Tracy for her recent actions, either, and there she overheard even more bickering with her in the center of it. Rock. Hard place. Meet Amy Barlow.

The short story is that Amy decided nobody wanted her so she packed up and took off. She didn't get too far, straight for the bus stop, which is the last place people thought to look. Michelle made up with Amy, at least but decides to leave Steve. She has had enough of him giving her grief and thinks they need a bit of space. Steve backpedalled pretty quickly. He doesn't want her to leave but let's face it, he wasn't treating her very well, either.

Platts are moving back to Number 8 and Sarah is worried that she let cats out of the bag in her drunken ramblings. It would be really hard moving back in there now that everything is out in the open. Andy's back in town! Ooh, Steve's doggy, Rover has made a return appearance and so did Eccles!

Jason is still out of sorts and worried he'll get done for murder. Todd doesn't know what to do about this so called confession and Billy feels like he's stuck between a rock and a hard place, too. He worries about Sarah and all she's been through but he can't tell her that he knows what she told Todd. Todd's solution? He told the police Tony confessed! Todd is a very good liar, though, so it sounds credible even though the police inspector was highly skeptical. 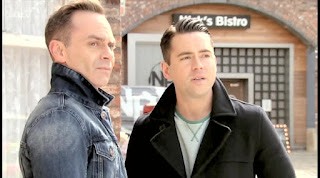 When Jason found out that Todd has accused Tony of the murder, he and Billy both were shocked for different reasons. Jason is still sure David did it and Billy knows damn well he did it to cover for Sarah. Eileen reckons the police will see through his motives for telling them that lie. Jason really thinks his father would have told him if he had killed Callum and wouldn't have trusted Todd with "the truth". I bet if Todd told Jason that he thinks Sarah confessed, Jason would change his tune. Todd told David and David was flummoxed, too but he stayed cool while talking to him but he is sure that Sarah said something to Todd and that's why Todd went to the police. Sarah doesn't mind because Tony's dead anyway, Kylie's horrified. David thinks it's not such a bad idea.

Now Billy really feels like he's in a difficult position and if he goes to the police, everyone will get in trouble now. He's really having a difficult time having to keep the secret. The stress is going to affect his relationship with Sean, too. The police really don't believe Todd's accusations, it's just too coincidental that he came up with blaming Tony since they're focussing on Jason. Eileen thinks it's possible Tony could have done it which doesn't sit well with Jason, either but that seems like a good thing to Todd, that Eileen is on board. Tony's dodgey and yes, he certainly had the motive after Callum beat up Jason. He could have done it.

In the meantime, Billy's brother is still lurking around and since Todd saw him, and he's the only one that knows who Lee is so far, he had to drag Billy away from a lunch with Sean because Lee was in overdose mode. Why oh why can't Billy just tell Sean the truth! That drives me nuts about soaps, people keeping secrets for no good reason just so that Sean could see Todd give Billy a hug and assume the worst.

Billy's having a conscience crisis and Sean thinks he and Todd are having it off. I think Sean is justifiably angry at Billy and there's no reason Billy couldn't tell him about his brother. So Billy is dumped. Sean has shot himself in the foot with relationships before and he thinks this one has gone down the tubes a per usual with his luck but it's not like that at all.

Finally, Sean found out about Lee because Todd told him! About flamin' time! At least he got to talk to Billy about his brother. Billy nearly spilled the beans about Sarah because he didn't know how much Todd told Sean. So, Sean has even more reason to be narked off because now he knows there's a second secret and that's one that Billy can't tell but he was forced to, more or less, since he told Sean about the bullying that Bethany's enduring, not the murder he thinks Sarah confessed to. So, no more lies. It's a soap, what are the odds? No, no more lies but Billy feels so bad that he thinks Sean was right to dump him so he stays dumped and Billy has yet another secret. Billy is developing feelings for Todd. Unexpectedly, and to his credit, Todd was outraged when Billy confessed.

Meanwhile, coincidentally, Callum's mother has come to Billy's church and wants Billy to conduct Callum's funeral. It looked like Billy was going to pass out or throw up! Certainly puts him in a difficult spot.

Gary is fitting in well now he's staying with Izzy. Izzy's court case is next Monday but she hasn't told Aidan and Johnny about it yet. She fessed up and Johnny decided to suspend her with pay. But what happens if she's convicted?

Izzy's trial is coming up. Anna's not going to bear grudges. How kind (/sarcasm) Family outing to the Red Rec with Gary and Kevin in a smack down over the playground equipment. Anna's going to stick by Izzy and Jake no matter how she feels about the crime, though. Families stick together. Turns out Gary lost the smackdown! Izzy plans on making a stand with this trial. I don't know what she thinks is going to happen. 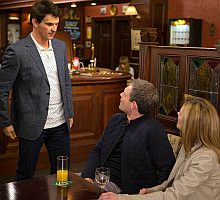 Leanne and Simon are back. We haven't seen Simon for yonks! Of course, Leanne hasn't heard the wedding gossip. What did I miss? they all say that! Now she's worried about Nick. There's still a bond there. Nick's pretty sure Robert isn't going to give the restaurant back and he's probably right but Leanne's going to give it her best shot. Pour on the guilt. Will it work? Nope. Leanne and Nick weren't willing to share the manager's job so Leanne quit! Andy's back but with Leanne not working, the restaurant is short staffed and Robert is in a mood, snapping at everyone and anything. Zeedan couldn't talk Leanne into coming back to work, either.

Nick is in the dumps and naturally, he would be. Looking for a job in the newspaper for him is the wrong way. He needs to get hold of an agency or headhunter. He's also getting on my nerves, going into the Bistro and wasting no time insulting Robert and getting drunk, which only makes things worse. Leanne is a good friend. I hope they don't put them back together again. I really never bought into that relationship and why should Leanne take up with Carla's castoffs? It's supposed to be Carla taking up with Leanne's castoffs, right?

Tim is up to something. With Craig. And boxes. Tim calls it practical science. It's actually a home brewery and he's calling it The Bucket and Sponge. Tim's made home brew in mere days. I doubt very much it would be good to drink so soon, would it? Craig faked being ill the next day, when he was actually hungover. When Beth found out, she blasted bad pop music into Craig's aching head until he confessed where he got it and then she tore a strip off Tim until Sophie offered her free beer.

Tim is strewing brewery makings and bottles are exploding all over the house. Sally arrived home dressed to the nines for a special function in a new outfit, guaranteed to end up with exploding beer all over it, right? I was waiting for it. Yep. Made a splash all right! Finally, Sophie tried to get Sally to see that Tim having a hobby is a good thing. She used Sally's snobbery to suggest a summer house over a shed, sounds nicer and nobody else has one. I'm surprised there'd be room!