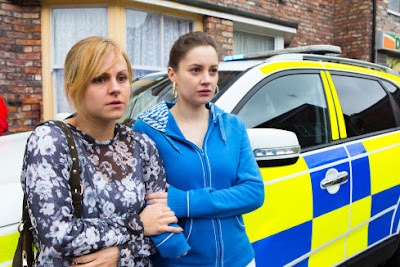 So all the chickens are coming home to roost for the Platts are they?
Yeah they are! It’s going to be a big summer with the discovery of Callum’s body. It then becomes all about who’s going to get the blame, who’s going to start flinging the blame and what it means for the Platts and other characters in the future. The body could have stayed hidden for years but there’s more drama with this I think when it comes out. It’s the beginning of the next chapter.

Was David sure they could keep the body a secret or was there a sense of inevitability?
No, he thought that’s it, they’ve got away with it scot-free. In a lot of the scenes on screen now David’s very upbeat, quite comical, to the point you think he seems to have completely forgotten about it. There are a few dips now and again when Sarah’s freaking out and he goes ‘shut up, we’ll be fine, no one knows, don’t let the cat out of the bag’, everything’s all right, we got away with it. So no he thought that’s it, we can draw a line underneath it. But obviously it’s not!

When Callum’s body is discovered does he still think it’ll be fine?
There are elements of that. There are also some scenes where he’s the one who’s petrified but he has to keep that to himself, because he has to be the strong one when Kylie and Sarah are falling apart. They’re the ones who are losing their minds so he has to be the strong one, but on his own you can see the pressure is getting to David and that there’s a chance he’s going to prison for murder.

Do you like the mature side to David?
Worryingly, crime seems to suit him. Yeah he does always seem to respond well to pressure does David, and in circumstances where it looks like his life is on the line, he always seems to get away with it unscathed. But murder? That’s a bit of a different kettle of fish so he is worried about it, very much so, but again he can’t let the others see that because if he thinks they’re going down for it, then they might as well all start blabbing because that’s exactly what they will do.

Does that fuel his actions after the body is discovered?
I think Kylie’s a lot more compassionate towards Sarah than David is. Kylie’s more of the moral one, saying no we all have to get away with it or none of us gets away with it.

Would he take the rap for Kylie?
Yeah, I think he probably would.

What if he and Kylie both go down for it?
No, that’s not an option for David, I don’t think he’d go for that. It’d have to be either one or the other. I think if he’s put in the position where Kylie says she’s going to confess then he’ll say ‘no, I did it’.

David attempts to blame Jason for Callum’s murder, how does that come about?
There’s a scene where David’s being questioned by the police and he’s getting all the blame – the body’s been discovered in his house, how does he get away with saying it isn’t him? So he goes ‘you know there are other people who had a grudge against Callum that it could have been. The police are like ‘well, who that had access to your house?’ and he goes ‘ah, the builders – Jason, obviously it’s Jason, yeah Jason’s done it!’ So that’s how that comes about.

Does he feel bad about blaming Jason?
No, not at all. He’s like yes finally! Something good has happened from this, I can now pass it off on him.

Is David confident this will work?
Well there’s a chance that it might so he thinks yeah say it. Also Jason’s thick so David thinks hopefully he’ll stick his foot in it and incriminate himself somehow.

How do Kylie and Sarah react to David’s plan?
hey feel slightly more guilty but David tries to convince them to roll with this because it’s a way to get out of it.

Could David persuade them that blaming Jason is the best case scenario?
I imagine David will say what are you on about, this is an absolute gift. We need to take this and let him get sent down the river.

So David plants the seed in the police’s heads?
Yeah, he points out that Jason didn’t like Callum and he had access to the Platts house, so then they have to go and question Jason and he’s arrested.

How does Gail cope with the discovery of the body? Who does she think killed Callum?
She thinks David’s done it because obviously it looks like he has. So she sort of falls out with him and says he’s ruining the family. But David insists he hasn’t done it, then he says look I’m trying to hold it together for Max and Lily, I’ve got to figure out what the hell to tell Max, who’s just witnessed his dad being pulled out of a drain, I’m having a tough time here.

Is Gail a suspect?
I think the Platts are all suspects. Initially we all get arrested because we’re all in the house.

You’ve just made a short film with Ben Price, tell us a bit about it.
We did Taubman which Ben wrote and directed. He gave me the script about two years ago and said what do you think of this, and I went yeah, that’s good and he said do you want to be in it. So we did it where work would allow, with Ian Puleston-Davies, and filmed it in an empty building in Media City one weekend. The trailer’s on IMDB and we’re having a screening at The Lowry cinema. We’re showing both films that Ben’s done with Ian, a five minute one and Taubman which is a 16 minute short with me and Ian in. The first one went to the film festivals and this one’s going to the film festivals now. And it’s going to BAFTA film festival. Imagine if we win a BAFTA!