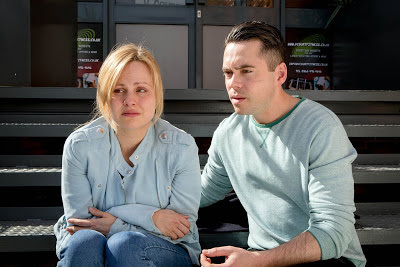 (This post was originally posted by Ruth Owen on the Coronation Street Blog in May 2016, reposted to this blog with permission.)


Ever since Callum's murder, it has been Sarah who has been the most affected. Kylie and particularly David, have seemed to hold up better than Sarah, not that that is much to be proud of. On a few occasions, it has seemed as if Sarah might just give the game away in her conversations with Billy and also Todd. Sarah has cried the most, worried the most and appeared the most physically and mentally disturbed by the murder of Callum. She is jumpy, nervous, anxious and on edge. Ordinarily perhaps baby Harry's crying would not have troubled her so much, but the knowledge that Callum's body is decomposing under the annexe where her mother sleeps, is just too disturbing. That he is also Harry's father adds a further dimension and it is Sarah's belief that Harry won't settle because he senses the 'presence' of his father.

Throughout the intervening weeks since the murder, David and Kylie have had to warn Sarah to get a grip and to control herself. They have reiterated that she must tell no one, nor act as if anything is untoward. Sarah has struggled, but so far has managed to keep the sinister secret between the three of them.

Would it be fair then to claim that Sarah is mentally weaker than David and Kylie? On the surface, perhaps yes. However, we must take into account the fact that Sarah has had a relationship with Callum and what's more, has carried and given birth to his child. 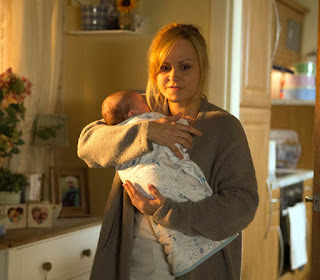 Tina O'Brien told us that she was determined in her preparation and in her presentation of her role as a woman suffering from post partum psychosis, to 'get it right' - to be as convincing as she possibly could to portray the psychological difficulties of women suffering all manner of problems after the birth of a baby. Tina  added that she went to a Wythenshawe mother and baby group to gain first hand experience from those very women who have struggled after the birth of their babies. I find this so impressive, as it conveys to us Tina's dedication and sense of responsibility to portray as accurately as she can, how it feels to struggle psychologically after having giving birth. And what's more - she has done a terrific job. What could have been melodrama, is, in the capable hands of Tina O'Brien, a convincing depiction of a woman on the edge.

The discovery of Callum's body now ends all speculation that somehow he had escaped and is just biding his time before reappearing and exacting a terrible revenge.

The Platts will be arrested, excluding Audrey and Nick, Tina said. 'Will they get away with it?' Tina was asked and her reply was that, 'If it is up to David, then probably.' David will cast the net far and wide in an attempt to incriminate others. Todd and Tony burnt out Callum's car in revenge for Callum having beaten up Jason, so it is likely that Todd will be arrested, though it is obviously too late for Tony. There will be several people associated with the drug dealing that will also come into the frame, maybe including Gemma.

I asked Tina about Sarah's friendship with Todd and whether she might confide in him as matters become very serious indeed. Tina replied that she and Todd become closer and he is a great support to her. The death of their child several years ago will always be something which draws and glues them together. Tina said that with Sarah, in her increasingly disturbed psychological state, is unclear in what she is actually saying to Todd, leading him to jump to conclusions and make incorrect assumptions. Sarah also wants to confide in her mother, Gail, but recognises that she cannot.

It was pointed out that EastEnders is running a similar story. Though Tina admitted that it was unfortunate, she was able to point out decisive differences in the treatment of post partum psychosis, in that Sarah's difficulties centre around Callum and the fact that she holds in her arms, Callum's child, half brother to Max and Callum's second son.

Tina was full of praise for new producer Kate Oates, who used to be at the helm of Emmerdale. Tina told us that Kate is 'very much on the ball' and is brimful of ideas. Though Kate is now fully a part of the  Coronation Street team, Kate's episodes will not hit our screens until the autumn