(This post was originally posted by Ruth Owen on the Coronation Street Blog in June 2016.)

Firstly, I would make a plea for Steph to appear more frequently and for longer. Lately all we've seen of her is when she is working in the bistro. True, she does get the occasional one liner but an actress of her calibre could do so much more. She is, as she demonstrated in the 'pictures on the internet' story, a skilled performer and she could easily carry a weighty storyline. Beautiful, talented, with an excellent ability to deliver a comedic touch, this girl is seriously under-used. 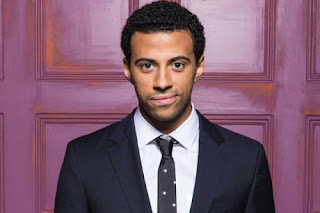 Secondly, Steph's brother Luke - currently in a relationship with Maria. It may just be my opinion but I wonder if others are less than convinced by Maria and Luke. I wonder too why Luke, who is a decent, handsome and intelligent young man is content to languish in a back street garage as Kevin and Tyrone's underling. Does he have ambitions? Might he want to open his own garage at some point in the future or even turn his capable hand to something else either car related or not? He doesn't seem to lack confidence and nor does his younger sister Steph, for that matter. Perhaps they could go into business together? Perhaps they could take advantage of government business incentive loans. 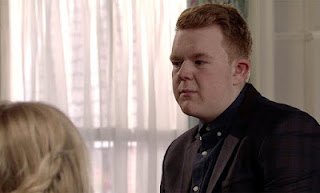 Third on my list is the jewel of a character who is Craig. What a joy he is and what a long-suffering son to his somewhat less intelligent mum, Beth. After having been ditched by Caitlin, it would have been interesting to hear more of  his thoughts and feelings about this. He did seem keen on her. He need some mates, other boys his age. It would be an opportunity to show young people in a favourable light, intent on various projects or working over their summer holidays, perhaps in preparation for gaining a university place. I believe that Craig is studying for A levels, but it would be good to learn some specifics and to see his interests in the world developing. A Gap Year maybe? Whatever it is, let's be knowing.

I would like to see more of Beth, but a calmer. more thoughtful side where she becomes a more rounded person and not just typecast as a figure of fun, as she is so often portrayed. To see her in serious conversation with the son whose initial she wears round her neck, would potentially be an excellent scene. How might Beth react to his ambitions and the possibility that he might leave home before long?  It occurs to me to consider whether or not Kirk might hold her back. In fairness to Kirk though, he does convey show emotional intelligence and it would be hard to find a fairer more compassionate man on the cobbles than Kirk, even though his intellect will not set the world alight. 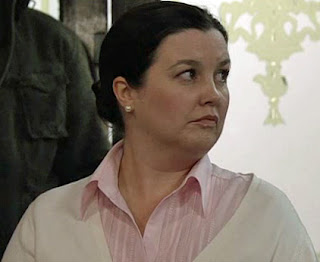 And finally, my fifth choice is Mary. Yes, it's true she did have some storylines to get her teeth into fairly recently, but now, armed with her award for best comedy actor in the soaps, it would be more than a welcome decision, in my book, to use her more. I sense that Mary and Gemma similarly divide opinion, but I can see those two developing a friendship of sorts...

I agree with almost all of your characters. Beth I am sort of on the fence about. She has a soft side and I think she is a good Mum but she can be a bit full on and has a nasty, gossipy side to her which I don't like. If the writers soften her character a bit more, then yes I could grow to like her more.
I have liked Luke right from the beginning, Steph has grown on me and Craig is a treasure!
Mary is always good for a laugh.