CBC to broadcast Corrie for one hour on Oct. 13 #CorrieLive 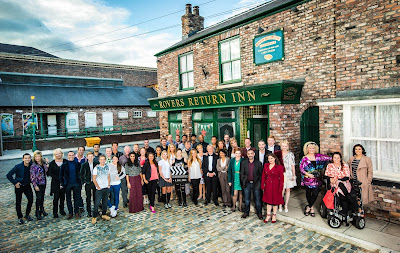 On September 23 in the UK, Coronation Street broadcast as a one hour live episode. Our Canadian Corrie dates are a bit of a moving target at the moment, shifting to about 2 weeks and a bit behind. In Canada, the live episode would have aired on October 13 and 14, if CBC broke it up into two nights as they often do for one hour specials.

I'm just watching Corrie on CBC now and they had an ad for the one hour special on October 13 so they aren't breaking it up into two nights, we'll see it almost the way it was intended (but with more commercial breaks, unfortunately, than was in the original episode). Still, we can't complain! The episode is excellent and deserves to be broadcast as one hour as intended.

This episode will mainly bring us to the make-or-break for the Platts vs Callum and it really is true that lives will never be the same. Roy and Cathy come to an understanding, Sally and Tim's relationship changes and Lloyd and Andrea face the future.

Email ThisBlogThis!Share to TwitterShare to FacebookShare to Pinterest
Labels: corrielive

That's great news! I watched the original episode already on ITV and was wondering what CBC would do....it's a great episode and it would have been a shame to lose the momentum. I think I'll watch it again when it airs!!!!