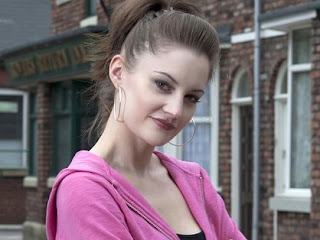 (This post was originally posted by Flaming Nora on the Coronation Street Blog September 2015, reposted to this blog with permission.)

Paula Lane, who plays Kylie Platt in Coronation Street, is opening her own drama school.

Paula and her husband Tom Shaw are opening the Lane Shaw Academy in Hebden Bridge on Saturday October 10, at Hope Baptist Church.

With more than 25 years of acting experience between them, they will be personally teaching the classes and hope to inspire and pass on their skills to other budding young actors.

Paula tells the Halifax Courier: “We are so looking forward to the school opening. I know from personal experience the advantages that acting can bring to a young person and it can be a great starting block to build up confidence in a young person’s development, for example with public speaking and social skills.” she added.

Paula has played Kylie in Coronation Street for the last five years and previously lived in Hebden Bridge, before relocating to London to pursue her acting career where she attended the Central School of Speech and Drama and graduated with First Class Honours.

Tom, who lived in Halifax, did his training at the highly-acclaimed London Academy of Music and Dramatic Art (LAMDA) and has appeared in several programmes, including the award-winning comedy the Inbetweeners, as well as working in theatre. They now live in Hebden Bridge with their eight-month old son.

“We are really excited about opening the Lane Shaw Academy,” said Tom. “There will be a free taster session on Saturday, October 10, for youngsters who want to come and see what it is all about. We’re going to keep things lively and fresh and have the children taking part in some really fun activities.” he added.

Lessons will be split into three different age groups between the ages of five and sixteen and will last an hour, during term-time, to coincide with the school holidays.