The magnificence of Erica Holroyd 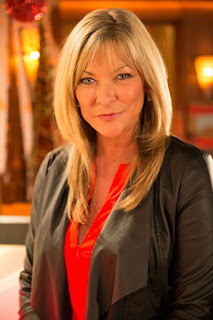 The magnificence of Erica Holroyd
Claire King as Erica Holroyd is an absolute joy.  She turned up in Coronation Street at the end of last year to see her old mate Liz in the Rovers Return and she's been on the show ever since.

She disappeared for a while to look after her mum, got pregnant at 50 with Nick's child, ran the wrath of Gail but then sadly lost her baby. Erica's settled down now into nights with Nick, days of drinking in the Bistro, and doing little else in between. And that's exactly why I love her. 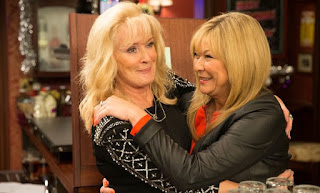 There's a lot we don't know about Erica - and that's another thing I like. I have no burning desire to unearth some mystery back story about her, it's good she has no baggage. I don't care. I'm enjoying watching her just being herself, drinking at the bar, exchanging glances and words with anyone she fancies. 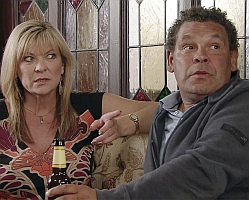 When she finds out about Nick snogging Carla, and she will as this is soap, will she crumble? Will she break down and die? Oh no, not Erica. She will survive. I'm not even sure she likes mumsy-boy Nick much. He's just someone to snog and canoodle until the bar opens again. Next, she goes for a drink with Lloyd, so she can't be that torn up about Nick before moving on to fresh meat.

Recently on Corrie as Erica sat at the bar in the Rovers next to Carla, she ordered a full bottle (a full bottle!) of red wine to drink on her own (on her own!) in the afternoon (I know!). When Carla came into the pub, Erica asked Sarah for another glass so she could share the bottle with Carla.

"You start drinking with me you'll get a repuation!," Carla joked.

Erica's reply was: "I've never really been one for worrying what people think."

And that, in a nutshell, is why she's wonderful to watch.