One last toddle on the cobbles 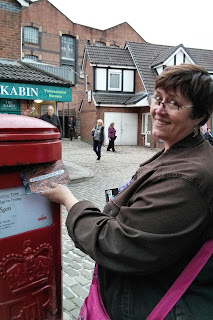 I'm visiting the UK at present and since the Coronation Street tour at the old Granada Studios is ending at the finish of 2015, I wanted to have one more chance to walk the cobbles. I've been very lucky over the years to have had several visits to the studios when it was a working concern, private tours through several means and lovely, generous people. I also went on the tour just after it opened last year in April. It might seem a bit redundant to go on it again, but when you love the show, the magic of walking down that street is still there.

I knew that a friend was taking part in a two week bus tour via Kemptville Travel out of Ontario and their group would be at the tour on Wednesday this week. I decided to time our tickets so that we might cross paths after our tours finished. I was lucky, her group reached the studio and were assigned the same tour time we had booked. Several of her group had been pleased to meet her because she's the chair of the Downeast Streeters Non Profit Society out of Halifax. The DES group (On Facebook, here) has brought Corrie stars to Halifax and organizes the quarterly "pings" (Corrie fan club get togethers at a local pub). What was even more ace is that a man asked me if I was the same person that blogged here. This fan, I believe his name was Wayne, enjoys the blog! Great to meet him!

The tour itself hasn't really changed. The inside part went from the green room, past the dressing rooms and into the studio proper where there was a five minute film filled with funny, and emotional moments. I did notice that it's been updated with some more recent scenes that aired since the last time I saw it. The costume and makeup area had some newer items as well including Beth, Kirk and Sinead's 80s theme wedding gear and Tracy Barlow's wedding dress from the ill-fated Rob Donovan wedding, complete with ripped shoulder (after the fight with Carla). There were two other identical dresses as well.

We saw Underworld with some rather cheesy voiceovers courtesy of Mike Baldwin, the Platt, Dobbs, and Carla's first flat. The barge was there and of course the Rovers and we got a few more minutes to look at the exhibit cases which we didn't have last time. They only walked us through the production section rather than stop and discuss it. I think on the whole, that's a better balance. The artifacts and props are more interesting for most fans.

The outside set of course, is the main attraction because you can take photos to your heart's content. There's a little cafe truck to the side of the Bistro which was not there last year but which is well appreciated when you are footsore and want a place to sit with a drink and write your postcards. Oh yes, I did buy some postcards at the shop and got them stamped with the Weatherfield postmark. 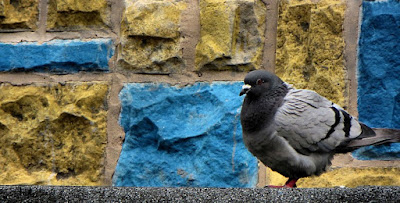 As I have a lot of photos from the set over the years, I concentrated my photo efforts in places I hadn't had a good look at before, like the back gardens of the new side and of some details like the windows or carvings on the tree outside the salon. Maxine's bench is looking a bit worn, I must say. You can see into the Garage now and go inside the kebab shop for photos which I did. The spot where the gym is now is still a Victoria Court signed door though it's not the main building of flats.

Just as we were getting ready to leave, I saw a group of women in the middle of the street and they all had Corrie character masks. Some of them had them on and a couple were trying to arrange them. I called over and told them they looked awesome and asked if I could take their picture. They agreed (see below! What good sports!) and posed for me. One of the ladies was American she said, but I don't think they all were. As I turned to leave I heard one say "Now just let me put Fred in me 'andbag". I walked away, smiling. 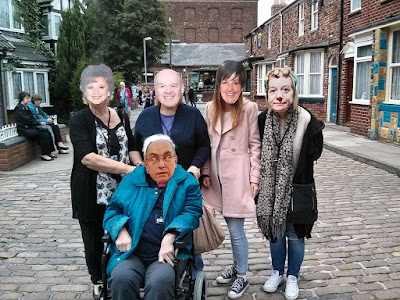 For a Corrie fan, it's worth paying the ticket money. The guides are all very well informed and entertaining. You spent an hour inside and in our case, the guide also spent another 10 minutes with the group outside by the houses. I'm not sure if they all do that. You can spend as much time as you like outside, looking around.

The tour is only open until the end of December. If you can get there, I'd highly recommended. I even enjoyed it the second time around!