Poor Max really is scared of his dad now. David still thinks they should take him to the police but Kylie doesn't think it will do any good, not after Callum wriggled out of it the last time. But hearing Sean and Billy talk about Jason changes her mind. They usher Max along but Callum starts goading them and unfortunately David rises to the bait and tells him that Max saw him kicking Jason. Oh dear. Callum can't intimidate Max, obviously, but he tries to force Bethany into lying that she was with him at the time. Good for her for standing up to him. But now, he's drugged Sarah. 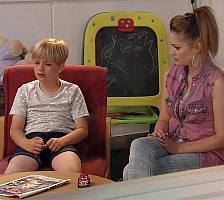 Max did really well at the police station, but it looks like it's breaking Kylie's heart. Max doesn't know why is father did what he saw him doing and is afraid Callum will come after him, too. Callum's plan is two pronged. He's drugged Sarah and Gemma manages to get Bethany's sympathy to get her in the car and persuade her to give them an alibi with a bit of scare tactics, but this time they've got footage of a drugged Sarah, threatening to do "something" to Sarah if she doesn't give him an alibi. Bethany quickly agrees to lie to the police. She's scared now. The thing is, she can lie but they should have experts that deal with kids that should be able to tell if a child is lying and he has no reason for it. That fright is real.

All that optimism was bound to have them all heading for a crash. It's Lilly's second birthday and everyone is happy and hopefull. Bethany is clearly feeling scared and worried. You can tell because she's not wearing makeup. She told her family the lies she told about Callum's alibi even though nobody believes her. She's up against a formidable force. How long can she keep up the pretence? I still don't get how the police believe her over a child who has no reason to lie.

I think Kylie nearly got through to Bethany until Sarah stuck her boots in. Still, she supported her daughter but she went to Tony with her suspicions since he's now an interested party and Tony isn't going to be as circumspect as the police when it comes to Callum's guilt or apparent lack thereof. Tony's really determined and getting angrier by the minute. Lying to the cops that he saw Callum in the area isn't really much help, he still didn't actually see anything. 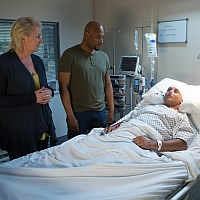 Eileen and Tony are still sitting vigil at Jason's bedside, alternating between fear, anger, self pity, begging a God they don't believe in. They end up clinging to each other in comfort. That would have been the perfect moment for Jason to wake up! But he's been kept in a coma medically so that won't happen until they're ready to try to bring him around, which they finally do. Good timing, I think Tony was about to charge his vehicle over Callum like a bug on the windshield!

Jason doesn't remember a whole lot, just being jumped, and he recognized Callum's voice, he thinks. That's all Tony needed. I didn't half enjoy seeing Tony scare the bediddles out of Callum!!

I gotta say, even though Todd had all this attitude coming, all that contempt from Sean, I admit to feeling a little bit sorry for Todd this week.

Aidan isn't too impressed by the accounts. Alya's making snide comments and Sally's trying to be upbeat and positive but when Carla's car gets repossessed, it might all be for nothing. Aidan realizes she was gambling way more than MIchelle thought she was. Is he still going to invest? Nick is on her back, Carla is giving up and his horrible to him but he's determined to stick by her. Nick is trying hard to persuade Aidan to invest. I don't think Carla's gambling days are over just yet, though. He's going to do it, for 40%. Will Carla be able to turn herself around? Fresh start?

Maybe not. first thing on his first day, Sally threw in a reminder of Maddie and you could see Carla's face fall and she Ran for the Hills. She got more than she bargained for when Nick dragged her to Lily's birthday party which then blew up into a big hot mess (see above). Meanwhile Alya threw Aidan in the deep end though he seemed to handle it just fine.

Aidan got a rental car for Carla, probably charging it to Underworld. A far cry from what she's used to and the minute she gets in it, she's off to the casino again and gambling online. Not cool, Carla.

Aidan didn't get off on the right foot with Robert and that made absolutely no sense. Robert was only trying to keep the peace between Tracy and Carla and neither he nor Aidan knows the history between the two women. Why on earth would they suddenly act like testosterone poisoned stags on the mountain? It's not as if they're fighing over either woman.

Hope is taken to the doctor and Fiz and Tyrone are told that she's got a lump in her abdoment. Things will move quickly, a scan will be ordered as soon as and Hope will be sent to a specialist. They're not taking any chances even though it still might be nothing. Parents' worst fear! Sally's wittering about work gossip doesn't interest Fiz who isn't about to tell people there could be a serious problem just yet.

Fiz called in "sick" to work but didn't say what her emergency was so of course there's now a big to-do and Aiden stuck his foot in it by confronting them on the street. Fiz didn't want anyone to know about Hope until they knew what they were dealing with. It's a tumour but they don't know yet if it's cancerous.

Lloyd is still in a funk over Andrea's departure. Steve, Liz and Erica make valiant attempts to cheer him up. They all share love-war stories. You see, it's the lies that Lloyd really had a hard time with and the women say he'd never be able to trust a word she said. Erica, Liz and Lloyd take the party to the back room with more wine. Lloyd is at least enjoying the women's silliness. They won't let Steve in on the fun because he's happily married. But Lloyd still wants her back.

But Liz thinks Erica and Lloyd would make a nice couple. Lloyd isn't so sure but Erica's hanging around the bar by his side. Steve let it slip that Liz is playing matchmaker and Erica wasn't long figuring it out. I don't think Lloyd's heart was really in it but Andrea came back and spotted him with Erica. Oops. Forget the elephant in the room, there's a big bad soap cliche in the way! 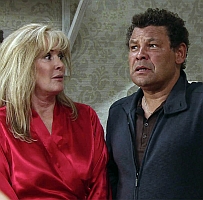 Well, in order to try to cheer up Lloyd, Liz offers up Housewives of Cheshire and a Chinese takeaway and what he took away was a major snog with his old flame and a night of rumpy pumpy! What confused me is why Michelle and Steve thought Liz was hiding Tony when they know that Lloyd spent the evening with her. Anyway it all comes out and Steve is told off by Liz who wonders if reconciling with Lloyd might be just the thing. Only it kind of surprised Lloyd that she thought along those lines once Steve told him.

Cathy and Roy are still not quite on the same page as far as house rules. Toast crumbs in the butter. Far too much soap in the sink for doing the dishes. Bad puns. It's going a bit rough from Roy's point of view but Cathy seems oblivious. Next, though, Mary and Yasmeen practically bully Cathy into teaching art classes when she clearly didn't want to. Craig got bullied into it as well as Emily and Tim. I'm also surprised that there were so many people that wanted to take the art class, which was only scheduled 24 hours before, that they had to turn many away! Cathy got turned away too, she panicked and ran.

Steve needs to rename that dog Boomerang. Now he thinks the dog's owner might not even want the dog. Or at least that the dog isn't happy there.