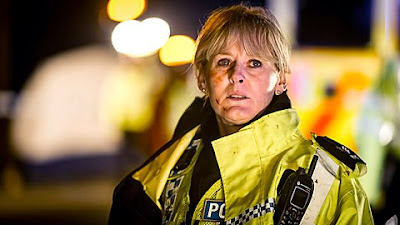 (This post was originally posted on the Coronation Street Blog August 2015, reposted to this blog with permission.)

Last year, Sarah Lancashire starred in a police drama called Happy Valley. Keep your eye open for it. We often get British dramas in Canada on some of the cable stations like Showcase. It's gritty and really, really good. Anyway.

Sarah used to play Raquel Watts in Corrie. Happy Valley was filmed in beautiful Yorkshire and was a really gripping drama, it really was, and I don't use words like "gripping" loosely. There's to be a second series that's starting filming soon and will air on BBC1 next year and there will be a few ex-Coronation Street actors joining Sarah.

We'll be seeing Julie Hesmondhalgh (Hayley Cropper), Amelia Bullmore (Steph Barnes) and Katherine Kelly (Becky MacDonald) in the series. That's quite a power line up, isn't it? Amelia has recently been in several series of Scott and Bailey which also starred former Corrie actor Suranne Jones (Karen MacDonald). Katherine Kelly has done many projects, too, best known to many for her role in Mr. Selfridge. Julie Hesmondlhalgh has only left Corrie more recently but has already shone on stage and in two short related series called Banana, and Cucumber and was in an episode of Inside No. 9.

Happy Valley is created by Sally Wainwright who used to write for Corrie. It will be like old home week and after seeing the first series, I can't wait for the second one!