Is the end nigh for Callum Logan on Coronation Street? 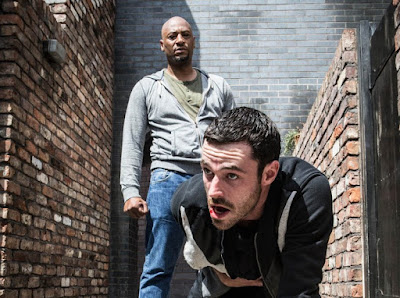 An eye for an eye and all that. Last week on Coronation Street we saw the campest villain that Corrie's ever had, Callum Logan, beat up Jason so badly that he ended up in hospital.

Little Max had seen Callum beat up Jason. Inside Soap magazine say that Max becomes terrified of Callum and won't go near him any more. Realising he's in a lot of trouble, Callum tries to enlist Bethany to give him an alibi but thankfully Bethany refuses to lie for him this time. 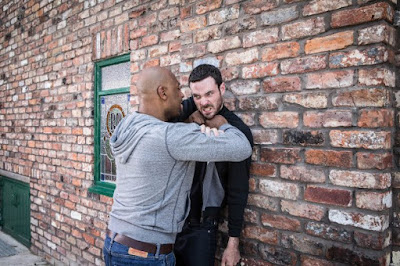 And then this week on Corrie, there was a revenge beating when Jason's dad Tony Stewart took out on Callum and beat him up too for beating up his son. Are you with me so far? Good.

I wonder if this signals that we're getting close to the end of the Callum storyline?  So far Callum and his gang have pretty much had things their own way and done their own thing. You know, all that real hard man stuff like threatening girls and being nasty to doe-eyed teenagers.

Now that Callum's had Jason beaten up (I bet he doesn't get his hands dirty by doing it himself, it'd spoil his nails), Tony gets revenge. And as we all know, you don't mess with Tony.

Surely it can only be a matter of time before Callum disappears for good?