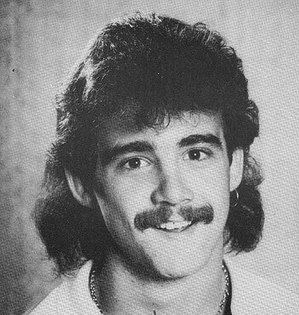 (This post was originally posted by Flaming Nora on the Coronation Street Blog September 2015, reposted to this blog with permission.)

Here's Kevin from his first appearance on the show, back in 1983.

After completing his course in 1983 aged 18, Kevin looked for work but couldn't find anything until he had a lucky encounter with Alf Roberts while hitchhiking back to Weatherfield in October that year.

Alf's car broke down while passing him by, and Alf offered to give Kevin a lift home if he could get it going.

When Kevin carried out the repairs with no trouble, the grateful shopkeeper recommended him to Brian Tilsley, owner of Tilsley's Garage in Albert Street, as Brian was looking for a mechanic to work alongside him. After a successful interview, Kevin was taken on.

Here is Michael le Vell in that first episode as Kevin. He first appears at 19 minutes into the
episode.