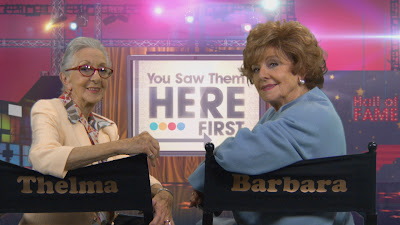 Two more Corrie connections will be explored in the anniversary programmes.

You Saw Them Here First will air on Wednesday 2 September at 8pm on ITV.  It's a trip down memory lane where telly legends get to watch old clips of themselves on TV.  Corrie's Rita and Mavis (Barbara Knox and Thelma Barlow) are shown watching their first Coronation Street scene together in The Kabin.

ITV Changed My Life will air on Tuesday 9th September.  It will feature people whose lives have been changed by ITV's programmes. The programme will include two Coronation Street extras who are married. These are Maureen and Joel Seaberg. Find out more about them here in their interview with Christine Warren's Canadian Corrie fun page.

Should be interesting to watch!

Email ThisBlogThis!Share to TwitterShare to FacebookShare to Pinterest
Labels: itv

Any ideas when it will air in Canada?

It's difficult to say if this special will air on CBC since it's mainly about ITV rather than Corrie and will only have the one Corrie segment. The Corrie "live" episode which will be a one hour Coronation Street in the UK, if it airs on September 23 as rumoured, will hit our screens mid October.