(This post was originally posted by David (Clinkers) on the Coronation Street Blog in April 2016, reposted to this blog with permission.)

It was probably writ large by Corrie godfather Tony Warren that the Street should always retain a certain matriarchal flavour. This is arguably the cornerstone of the show's enduring success. We warm to the strong, dependable maternal figures who rule the hearts and minds of their kinfolk. 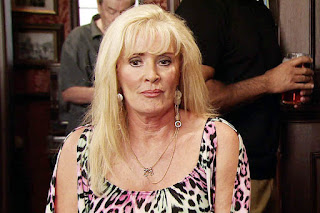 That is until they let us down. This week I was enraged to the point of hurling a ham barm cake at the telly thanks to the self-righteous wittering of Liz MacDonald. I should 'fess up and admit that I am in the tiny minority of Corrie devotees who doesn't particularly like Liz and that stretches back to 1989. Yet again this week we were treated to another lesson in how not to be compassionate from the short-skirted one. Given that poor old Michelle is running three (OK, two of them are pretty crummy) businesses, Liz could have offered a bit of support and a shoulder to cry on. Instead, she lurched around behind the Rovers bar, dispensing dirty looks and dragging on that ridiculous vaping stick. As far as Liz was concerned, her middle-aged son should be free to loaf around on a Spanish beach and have some fun. Hey - who cares about his businesses, his wife and his daughter? Certainly not Liz who put her nose to the grindstone and helped out by disappearing to a brewery jolly.  Meanwhile Michelle, with a face like an Easter Island statue and sporting a hairdo that Audrey must have conjured up in a nightmare, went off wedding planning with some supposed gorgeous 'hunk' of man.

Not that Michelle has ever been that much better as a parent. For years now, she has failed to mention her real son. Not the pale little boy turned muscled druggie DJ - the other one. The one swapped at birth who she bonded with and then forgot. Forever. Is she not curious or does she not care? Maybe she is so busy folding her arms and trying to emulate Dame Karren Brady that she just doesn't have the time.

It comes as a bit of a surprise to see that, at the moment, possibly the best mum on the cobbles is 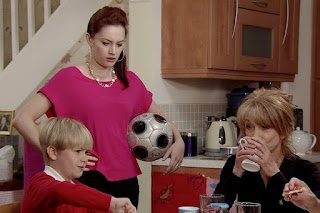 Kylie. There is something very natural in the way she moves around the kids and ferries them from place to place. It comes from the heart. Well, it does for now but as we all know, she will be gone in a few months and so her nourishing and nurturing skills will no doubt find themselves behind the bars of Cell Block Weatherfield. Yellow tabards and cheerless visiting room here we come.

Begrudgingly, you have to hand it to Eileen, M'lday of the Miseries, that she's coped well with life as a single mum. The woman can't hold down a relationship for toffee but she does work (let's not push it and say 'work hard') and she has provided for her two boys-to-men who obviously find the lure of her cooking difficult to break free from. Her fish fingers au poivre are to die for.

Rita, while not having any children of her own, also tends to do a sterling job in shepherding those who need it. She's provided motherly advice to many over the years and is currently providing a protective buffer between Jenny and the outside world. Rita's downfall has often been her self-righteous streak coupled with her tendency to reach for the cheque book in order to solve a problem. She can be your best friend but also your worst enemy. 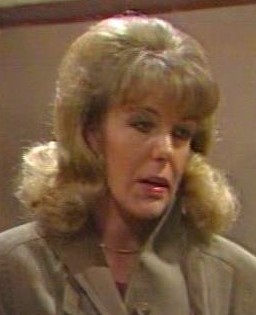 The Audrey-Gail dynamic has turned on its head over the years. Many will remember that the nascent Audrey wasn't always the easiest character to watch. If we are being polite, then we would have called her 'flighty'. Motherliness and morality were not high on Audrey's list in the early days. She was fairly awful to Gail after the latter had been attacked by one of Aud's 'friends' back in the 1980s. Gail may have loved her mother but she didn't particularly like her selfish streak. In recent years though, the tables turned and Audrey found herself having to cope with the fallout from each successive  Fail Gail marriage. It's never been the easiest of relationships and probably never will be.

As for Gail? Well, would you want her as your mother? She almost suffocated Nick to the point where he seems to have aged well beyond his thirty five years. True, she did support Sarah, especially following the shock of her first pregnancy but this seemed to be to the detriment of her relationship with David. You reap what you sow Gail and now you are at the mercy of an adult Rosemary's Baby. Be afraid until the end of your days.

Let's not dwell too long on Tracy-luv as a mother. She has a very odd relationship with Amy, part mum, part accomplice. At times it isn't nice and poor old Ken is often forced to put down his book and act the part of parent to our Ames. Tracy may well be creating a monster for tomorrow.

Maybe Liz needs to get her act together and hand out some tough love to the errant Steve. Enough of the vaping and vamping. Buy yourself a nice M & S mac, some sensible shoes and get yourself across to Spain. Although knowing Liz, within five minutes of landing she would be on the beach, drink in one hand and an eye firmly on the good time. Wither Michelle . . . 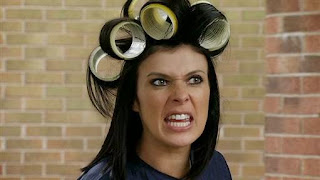 Thank goodness Amy has Michelle to confide in,
since Tracy-luv has forgotten the alternatives
presented to her (by Robert I believe).

Yes Liz, send Fat Brenda to Spain to drag Steve
back by the ear/nose/more painful parts, and start
helping Michelle running the bleeding pub that
bears YOUR name over the door.

When Paula Lane (Kylie) goes off on maternity this time,
please please have her leave for a nice reason, or just
don't mention her at all and she can just reappear in a
few months as though nothing happened in between.
Enough with the going off on a drug binge, we had that but
she's shown what a great mum she can be when given a more
stable family (OK it IS the Platts, I said more stable, not
perfect) life.

Sadly Paula Lane (Kylie ) is leaving the show permanently this time. I have really grown to like her new warm funny character.The scenes with her and Sarah's new baby ( Harry Platt the bookie )were sweet.
And then there is Liz . I cringe every time I see that vape sucking miserable face that would turn milk sour. I would be happy to see her packed off to Spain to live with that whiny son Steve , never to come back ( No offence to Simon Gregson or Beverley Callard . They play the parts well )
Michelle and Erika could easily run that pub along with Sean.