Liam Bairstow: "Amazing to be considered a role model" 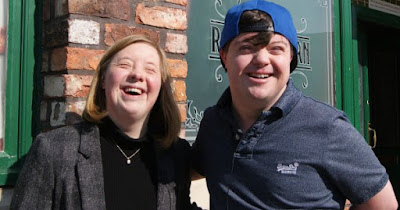 Liam Bairstow, who plays Alex in Coronation Street, was interviewed by one of his biggest fans on BBC Radio 5 Live.

And Grace, who also has Down’s Syndrome, got the chance to grill him about his experiences on the long-running show so far for BBC Radio 5 live.

It was conducted during Down’s Syndrome Awareness Week, aimed at improving understanding of the condition which affects around 750 babies in the UK each year.

Liam said:  “Being an actor on the biggest soap, it has been a huge honour to work with everyone here. I’ve got loads of people supporting me. My advice to others would be don’t be nervous, because it takes guts to be on TV.”

You can listen to - and watch - the interview here.