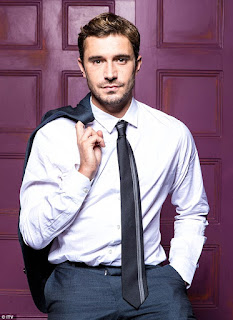 (This post was originally posted by Scott Willison on the Coronation Street Blog January 2016, reposted to this blog with permission.)

There's been a flurry of Corrie actors taking time off from the show so they can do theatre.  Roy and Sophie and Les Dennis (still can't get used to calling him Michael, sorry) will all swap the cobbles for the boards in 2016.  The one that really shocked me was Oliver Farnworth, who plays Andy, because basically, I'd forgotten he was still in the show.

Andy arrived with great fanfare in 2014, though of course, he was Gavin then.  Les Dennis had a long-lost son and, after much scouring of the internet and interrogation of elderly relatives, he discovered that Gavin lived in an apartment building in the city.  Les shoved a note under the door and, sure enough, a few days later his handsome progeny was on the doorstep.

In retrospect, that should have been a giveaway; with all the will in the world it's hard to imagine Oliver Farnworth sharing DNA with Les Dennis.  Still, we went with it, and after a fishing trip together, "Gavin" asked dad for some money to pay the rent.  We, the viewers, were then let into a little secret: Gavin was actually Andy.

"Oh!" we all thought.  "Now it's clear!  He's a conman!"  Except things went peculiar around that point.  Les Dennis developed a heart condition - I mean the character did, the actor's health is fine as far as I can tell, but I've already forgotten what his name in the programme is - and Andy/Gavin developed a conscience and started caring about his fake dad.  He stopped asking him for money, and started going with him to the hospital.  It all became a bit odd. 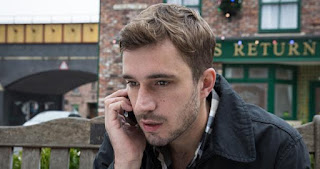 Further oddness followed when Andy/Gavin got a job at the Bistro as a cocktail waiter.  The thing is, it had been established that Gavin was an experienced barman - Les Dennis had visited his former place of employment in the city - so did that mean Andy was lying on his CV?  Was Andy a proper barman as well?  It started to get muddled, and at this point I began to think that the writers wished they'd never started the whole charade in the first place.  A simple long-con by a dodgy geezer had become a perfectly nice man deciding to assume his friends' identity because... he thought it would be funny?  To make Les Dennis feel better?  It all became confusing. 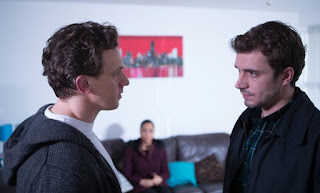 Gavin's return - the real Gavin - ramped it up into farce levels.  Not a good farce, like early Frasier, but a slightly over-frenetic, desperate farce, like later Frasier.  Gavin turned out to be a wrong 'un, tried to blackmail Andy, threatened Gail on her latest wedding day, and then vanished with a load of cash.  He then died in a car crash, conveniently; I suspect at this point the writers hoped they could just pretend Andy was Les Dennis' son until the end of time, but no, we had the reveal still to come.

Somewhere along the line, Steph had been dragged into his web of deceit, and became his unwilling accomplice and then, his very willing girlfriend.  Steph is bubbly, fun, and a joy whenever she's on screen, which makes up for some of Andy's deficiencies.  He is astonishingly good looking (we're still waiting for that topless scene, producers) but he's not got much character at all.  Andy seems like a thoroughly nice man, which is acceptable, but doesn't really make for good drama.  It also seems to directly contradict all that "pretending you're an elderly man's long lost son" business as well.

So it was revealed that Gavin was actually Andrew Carver, and I had a moment of giddiness because that's the name of the rapey pop star in the underappreciated movie classic Showgirls.  Les Dennis felt betrayed and split up from Gail.  There were a few episodes of angst.  And then... nothing.  Everyone just got on with their lives.  Les Dennis forgave Andy to the extent that he actually moved in with him.  Nick refused to sack him from the Bistro even though he'd obtained the job under false credentials and Andy had directly caused Nick's mother to have her shortest marriage yet (quite an achievement for Gail).  Everyone carried on. 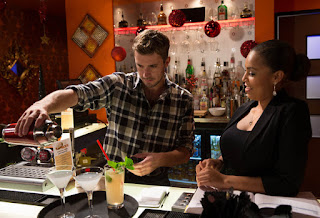 There were a couple of moments where Andy popped up again - he was there on a night out with Steph, Kate and Sophie, though I sort of imagine he was just there to hold the girls' handbags while they went dancing, and he had a brief moment of alpha male punchiness when Steph's ex blackmailed her - but most of the time he's just been behind the bar in the Bistro, aiming his puppy dog eyes at the camera.

I'm sad to see Roy taking time off, because I love him when he's onscreen, but it's tempered with satisfaction that he'll be back.  Andy though?  If he'd just vanished, would we have noticed?  Perhaps, while he's away at the Royal Court, the writers will find a personality for him hidden somewhere.  Or at least persuade him to go shirtless.  Either way I'd be a lot happier.

Gee, I thought I really liked Andy. Now I realize I just like looking at him. How disappointing. Still, I hope they find some storylines Oliver can get his teeth into.