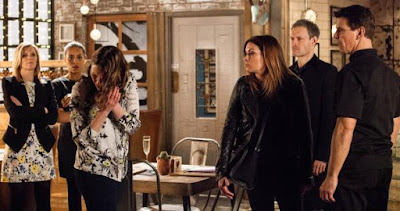 We can't have been the only Coronation Street fans who cheered this week when Carla Connor slapped Tracy Barlow across the chops.  It was a good slap, a really good slap, and ranks up there in the top five best slaps I've seen on the show.

And it's started me thinking about other slaps and fights we've seen on the show. I know we shouldn't enjoy violence, but you know, it's soap so it's OK. Isn't it?

1. Sally slaps Natalie Horrocks when she found out about her affair with Kevin Webster. 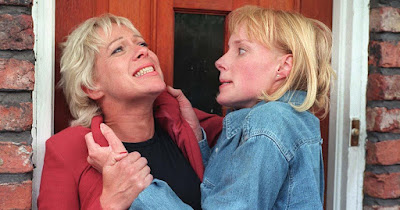 2. Ken Barlow hits Mike Baldwin in the factory when he finds out about his affair with Deirdre. This was so bad it's become a classic. Ken's fist nowhere near connects with any part of Mike's body. 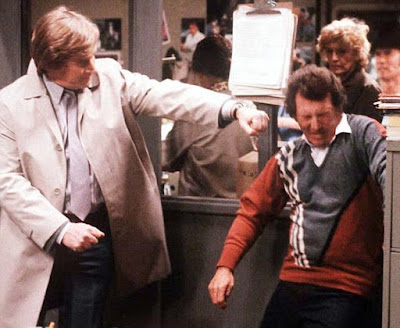 3. Gail and Eileen fight in their dressing gowns. Gail knocks on Eileen's door, determined to have it out with Todd who's done the dirty on her Sarah.  This is probably my favourite Corrie fight, not just because of the two women airing their dirty laundry in public but for Gail's comment: "Oh, here's the other one. The rest of The Village People!" 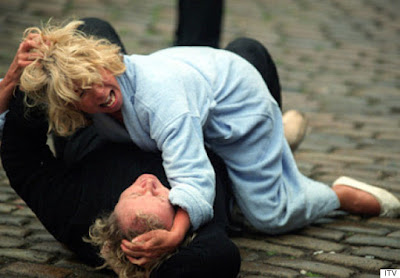 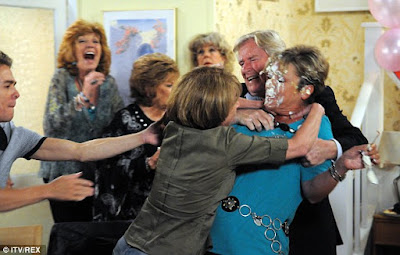 
5. Ena Sharples fights with Elsie Tanner. The fight spilled out into the Street and Ena ended up smashing one of No.11's windows with her handbag. 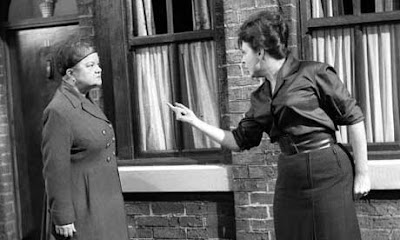 Are there any more you would have included?

Love these, thanks for posting them! I have a question though, years ago, I heard a Corrie character refer to this type of "street fight" (between neighbours, usually women, drawing crowds of on-lookers) using a particular colloquial phrase and I just can't remember what it was...Was it an "up-and-downer"? It was something like that. Like "Elsie and Hilda are having an up-and-downer, come quick!" Does this ring a bell with anyone? Thanks!

Doesn't sound familiar. I've heard of argy-bargy but that doesn't seem like it would describe a fight that got physical, more of a "war of words"