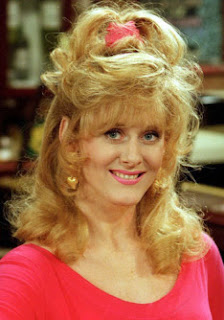 Introduced as an assistant at Bettabuys supermarket, working alongside the likes of Curly Watts, Reg Holdsworth, Vera Duckworth and Ivy Brennan.

She was later hired as a barmaid at the Rovers and formed a close friendship with landlady Bet Gilroy and fellow barmaid Betty Turpin. She also dabbled in modelling.

Soon enough, Raquel was in a relationship with Des Barnes. She was heartbroken when ex-wife Steph turned up as he hoped for a reconciliation. Time and time again Des and Raquel would rekindle their relationship, only for Des for dump her when he got a better offer.

After failed relationships with Gordon Blinkhorn and Wayne Farrell, she married friend and confidante Curly in 1995. But the aching truth was that she didn’t love him. She still loved Des, for all his faults.

She confessed to Curly her real feelings, but he forgave her. They had a happy marriage until she left him – not for Des, but for a job in Malaysia. She made a brief return in 2000 to let Curly know that they had a daughter called Alice. Raquel was by then living in Paris.

Ditzy Raquel’s notable scenes during her tenure include having French lessons with Ken Barlow in the Rovers backroom and having a conversation about football with Alma Baldwin and Denise Osbourne in the Rovers bar. She is undoubtedly a classic Corrie character.

A fan of Raquel?