Dolly-Rose Campbell: "I knit jumpers for my dog" 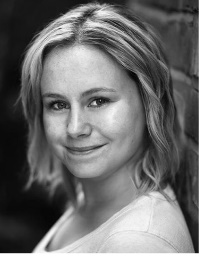 There's a great interview in this week's Inside Soap magazine with Dolly-Rose Campbell, who plays Gemma Winter in Coronation Street.

Dolly-Rose looks so unlike Gemma it's unreal. She is so far removed from the gobby, chavvy character that we love (and some of us hate) on Corrie.  I love Gemma though, I'm firmly a fan.

In the interview, Dolly-Rose says that she likes knitting and sewing in her free time and even knits jumpers for her dog.

She loves playing Gemma and says it's the best character she's had.  Before she joined Corrie she says: "I did lots of work in radio and starred in quite a few dramas, usually as younger characters.  The last thing I did before Corrie was a radio programme playing a woman in prison who was having a baby.  That was really good because the play came about from doing workshops with women from Styal prison - that was really interesting."

The best thing about playing Gemma, she says, is any scene where Gemma is eating, especially biscuits. "It might look like I'm only having one on screen, buf if we do loads of takes then I get to eat lots and sometimes I get through a whole packet."