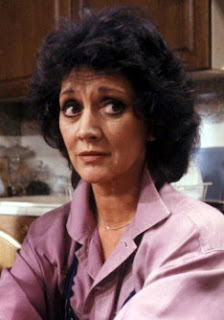 Introduced as the wife of café owner Jim Sedgewick and later takes over the café when they divorce in 1982. After immigrating to Florida, she returns to Weatherfield in 1988 and takes a more hands-on role in the business. She forms a business partnership with Gail Tilsley in 1989 and over the years they become close friends.

Upon her return, she begins an on/off relationship with Mike Baldwin. After being dumped by him for Jackie Ingram in 1990 and briefly dating his nemesis Ken Barlow, Alma and Mike marry in 1992. The marriage was popular with fans as Alma’s sympathetic and liberal-minded persona clashed with Mike’s capitalism and greed. The Baldwins were married until Mike had an affair with Julia Stone in 1999.

In 1997 Alma was kidnapped by Don Brennan in an act of revenge against Mike for ruining every aspect of his life – job, business and love life. Don drove his taxi into the canal but both Alma and he survived.

As well as Gail, Alma formed a close friendship with Gail’s mum Audrey Roberts. They enjoyed socialising over a gin and tonic in the Rovers and shopping in Manchester, but to the annoyance of their respected hubbies Mike and Alf. Both confided in each other about their problems although the friendship was tested when Alma rev
ealed that she’d made a pass at Audrey’s son Stephen in 1996.

Alma sold her share of the café in 1996 to Roy Cropper and got a job on the tills in Firman’s Freezers, much to Mike’s chagrin. She was eventually promoted. She was involved in an armed siege in 2000 but escaped unhurt.

In 2001 Alma received the devastating that she had terminal cervical cancer. Now living with Audrey, she is nursed and care for by her friends and ex Mike is also by her side. She opts to die at home and she passes away surrounded by friends Audrey, Gail, Ken, Curly and Mike.

Were you a fan of Alma?