(This post was originally posted by Emma Hynes on the Coronation Street Blog in November 2016, reposted to this blog with permission.) 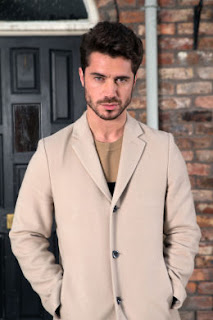 The Barlow family is about to get bigger to the tune of one son and a grandson in the forms of Daniel Osbourne and Adam Barlow. I travelled to Manchester to hear all about what’s to come, and am delighted to bring you a trio of interviews with Rob Mallard, Sam Robertson and producer Kate Oates.

Here, I chat with Sam Robertson who reprises his role as Adam to hear all about what might lie ahead for his character, with Kate on hand to give some further insights into the return of Mike Baldwin's son and Ken’s grandson.

Adam has been living in Canada since he left Weatherfield in 2007, and it sounds like he has done well for himself, having trained as a solicitor, before Ken’s stroke brings him back to Weatherfield. It seems, however, he may have some scores to settle, and something might occur that sees him need to earn a living in Weatherfield and prevents him returning to Canada.

So, was Sam surprised to get the call to return to the cobbles?

“I think whenever you leave you half expect the character to die on screen, but my character left in the back of a taxi, so the door I felt was always potentially there to come back” he explains. “But I think the longer it goes without it happening, you think it’s not going to happen. So when the opportunity arose this summer it was quite a surprise.”

Despite playing the role before, Sam had to go through the audition process during which he enjoyed doing a screen test with Chris Gascoyne. While this was to allow Coronation Street to ensure he was right for the part, Sam explained how he too wanted to be sure a Corrie return was the right fit for him. “I think I’m very different as an actor compared to when I left the show” he explains, adding “well, I class myself as an actor now whereas when I left I felt like I was basically a trainee or a runner of some kind, I was pretty useless wasn’t I. So yeah, it was good to do that because I felt a lot more confident and secure as a performer. But, I was back in this old environment which brought back memories of being the opposite. So it was nice to actually be able to express myself a bit more and I felt that, okay, maybe this could work, maybe this will be exciting.”

Asked if Adam has more of an edge this time round, Sam reveals “yeah, I think the character is a bit more fully formed. When the character first came into the show, no one knew even what his second name was. Sometimes I’d get a script and it would be Adam Baldwin, and then the next week it would be Adam Barlow. One minute I think the idea was that he was going to be a bit of a cool kid and a hit with the ladies and the next minute he was a little bit bookish and he was a bit nerdy. I don’t think anyone quite had an idea what to do with him. And I felt that really I never got the momentum going from that beginning and, ultimately, I decided it would be best if I left. So for it to come back again, I wanted to have assurances that it was going to be a lot more fully formed and a lot more involved, and already that’s clearly happened. So for me, it’s a lot more exciting to be here this time than it was last time.” 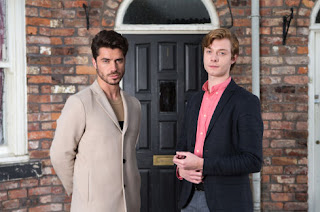 Speaking of his on screen relationship with Rob Mallard in the role of Daniel, Sam reveals, “it’s been fun, it’s been quite natural.” The pair met on their first day filming and Sam explains how he felt the scripts were written before they had been cast. “Obviously as actors become more involved with the show, then the writers start writing for the actors and so on and so forth” he explains. “So what we were bringing was basically what was just on the page and it was just us, as actors, naturally sparring off each other. Personally, speaking for myself, and Rob can answer for himself, it’s been fun.” He turns to Rob, laughing, “so, no pressure for you to say that”, but Rob heartily agrees.

With regard to who Adam is likely to get involved with, we’re told by Kate that Adam has grudges against the Connors after they swindled him out of his share of the business for a small sum. She also explains how he builds on his existing relationship with Tracy who considers Adam to be “glitzy” and fun to hang out with. We’re also told that Daniel and Adam will end up sharing a room in an “odd couple” style scenario.

Having lived in Australia and LA over the past few years, Sam relied on his Mum and a crash course catch-up with Corrie, to get up to speed. For him, the prospect of the show under Kate Oates is an attractive one. “I thought Emmerdale was fantastic when I watched it, and I thought Corrie was a little lacklustre and I was a little bit concerned at the direction it was going” he reveals. Asked what he thought the show was lacking, he explains, “Well, I don’t know if it was necessarily lacking something, I just thought the episode of Emmerdale outshone it really. That was my personal opinion.” He adds, “I just think this show under Kate for me personally will be a lot more exciting and a lot more interesting. Not to diss anyone else’s history, but for me, personally, that’s what I think.”

Speaking of the difference between soap and other productions he explains, “I think like any actor, most jobs I’ve done you’re starting the job with the rest of the production so what’s on the page is all you can gauge as far as doing your job, but with this you can watch it and you can see, oh okay, well this the show that I might possibly be joining," He continues, "having discovered that Kate was in charge of Emmerdale and then she was the one moving over, I thought the synergy here is perfect for me, and hopefully I’ll be proven right.”

Sam tells us that Adam is “very much a ladies man” with a “few less scruples” than Daniel.

In playing Mike Baldwin’s son, Sam plans to look back at old clips. “I’m trying to get some footage of Mike. I mean, I remember Johnny Briggs quite well it’s quite a hard character to forget, but moreso I wanted to revisit his early days in the show when he first arrived, when he was younger; obviously I worked with him he was a bit older” he explains.

I like the idea of a young Mike Baldwin on the street, and it will be interesting to see what Sam brings to the role of Adam this time round.

Read my interview with Rob Mallard, and hear more about the Barlow clan from Kate Oates.