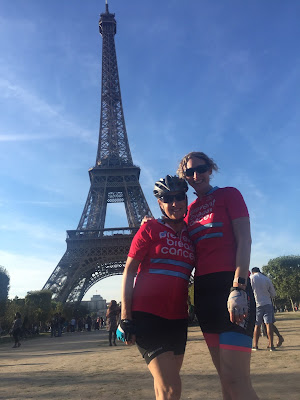 Coronation Street star Sally Dynevor had quite the voyage recently as she completed a London to Paris cycle challenge in aid of Prevent Breast Cancer, raising over £60,000 to date.

The actress, who plays Sally Metcalfe in the ITV soap, took on the mammoth 320-mile challenge from 21 to 24 September to support the Manchester-based charity, which is the UK’s only charity entirely dedicated to the prediction and prevention of breast cancer.

The first leg of the challenge saw the team take on a number of steep climbs and descents until they reached Dover, where they boarded the ferry to Calais. Once in France, they tackled the demanding hills of the countryside and cycled through the Somme, before enjoying a Champagne finish at the Eiffel Tower.

Now back on British soil, Sally said: “I’ve been involved with Prevent Breast Cancer for a long time now and it’s a very important charity to me, so I just had to join them on the London to Paris challenge. While parts were certainly tough going, I’d do it again in a heartbeat. I’m thrilled with the amount raised and proud to have helped fund research that will one day mean no one has to face the same battle Morag did.”