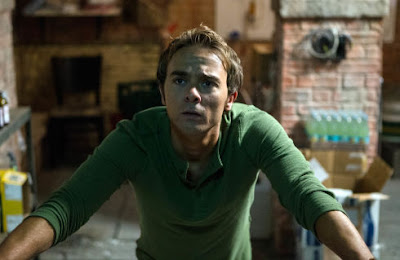 Here's an interview with Jack P Shepherd, who plays David Platt talking about this past few episodes and where David's head is.

Is David’s plan to try and kill Clayton?
That’s his mission really, he doesn't think prison’s good enough for Clayton and he's not convinced he's going to get sent down for murder anyway. He thinks it’s gonna be manslaughter, so he’ll be out in a few years. He wants to kill him but he knows the only way he’s gonna kill him means that he has to kill himself in the process.

What is his plan?
His plan is that he’s going to blow him up. He does a recce of the court and tries to see if he can get a weapon in there and shoot him but he sees that it’s impossible to get a weapon past the security. He decides that he’s going to have to get him before he gets to court so when the prison van approaches the court that’s when he’s going to drive alongside it - the car is already doused in petrol he will already doused in petrol. His plan is to drive into the prison van whip out his lighter and as the car blows up they all blow up.

What about his children? His children are going to be orphans?
At the minute he can’t really engage with them anyway. Because all he’s got is this trial looming over his head and wanting to kill Clayton. He’s become obsessed and the way he sees it they’ll be cared for after he’s gone. They've got enough support around them and will be fine. He sort of thinks in some way that when they are older they'll understand it and they might even thank him for doing it.

Does he want to die?
I don’t think he wants to do it but it’s the only way and in some way because he’s hurting so much if he does die he won’t hurt anymore.

It's very intense all the build up to this how do you feel at the end of a day after those sort of scenes?
I enjoy the work, I don’t find it exhausting when it is so well written, the dialogue is great and it isn’t actually about stunts and explosions it is about David being brought to this point.

How do you unwind the end of the day?
Just learning the next day’s lines. I don't really take things home with me the only time I really did was all the stuff when Kylie died, that really really got to me. Nothing has ever got to me as much as that where I’ve gone home and still been thinking about it not being able to  eat or sleep or drink .

Is the scene where Kylie died on the cobbles the most traumatic scene you've done?
Yes without a doubt absolutely, we filmed it for across a couple of weeks I felt really privileged actually because the whole crew on that unit they were so invested in it and everyone was determined to make it perfect.

Have you watched it?
Yeah I've watched it back when we had people round at the house later that night but I just tried not to look at anyone I just watched me to make sure I was in the right frame and I found the lense. I was happy yeah. I  think it was good, everyone was amazing in the scene.

Were the scenes in the cellar physically demanding?
Yes they were - he's desperate to get out -  he's crawling through air vents and climbing up to try and find a way of getting out. And he’s not alone in the sewer pipes!

I got a text about three months ago when they were writing it. The assistant producer text me about future storylines and he said everything's going great - by the way how are you with cockroaches? I said, ‘Yeah er fine with cockroaches, the more the merrier, not bothered by them’ then when we we came to film it he sent a text saying couldn't get cockroaches they were too expensive so we've got rats - enjoy!

So how are you with rats?
Fortunately I’m fine with rats, they are real rats! I'm in the sewer it is very realistic. They dirtied it put the drips in and I had to crawl through it. They were finding it difficult to light the sewer with me in it because obviously it had to be dark, I thought it would work well to light it with the lighter that David has got on him. It worked really well and as the rats are coming towards me I got to do most of the filming, I got to hold the camera and go in with the camera and my lighter and crawl up the sewer and I got to pull focus and start focus on the lighter and as the rats come in, I had to switch focus on the rats to see the rats coming towards me - it's great  they were coming towards the flame because that's all they could see.

How long does Gail plan to have him down there for?
Only the night until the trial is over and Clayton is safely out the way so there's nothing he can do as it will be too late. But he's cleverer than Gail!

Does he have any suspicions that there onto his plan?
None at all. He gets all the petrol and everything ready. He’s made a video saying farewell to the kids and that is what alerts Gail and along with Sarah and Nick they come up with a plan to lock him in the cellar. They say that there's a power cut in the bistro all the electric has gone out but it would be a nice idea to have a family meal by candlelight. David thinks it would be nice to spend the night with the family because he’s obviously thinking it could be his last night alive.

How does he end up getting locked in?
Nick asks him to help him choose some wine in the cellar and David thinks it is an excuse to talk about something so he agrees to go down to the cellar. Gail is also there and they lock him in. When he asks what is going on they explain they have seen the video.

How does he react?
Well his first thought is how to get out. He is pleading with them trying to explain that it is his only chance to get revenge on Clayton. Nick is there trying to talk to him and he's having none of it and there's loads of emotional scenes down there between the brothers.