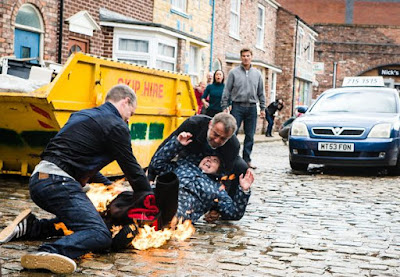 (This post was originally posted by Tvor on the Coronation Street Blog in October 2016, reposted to this blog with permission.)

There's a really good interview and feature in the Manchester Evening News today with Debbie Rush who plays Anna Windass talking about the stunt this week where Anna's clothing caught fire after the accident.

Debbie was determined to do the stunt herself though there was a stunt double on hand if she decided to back out. She wore protective clothing and cooling gel against her skin, of course and others in the scene were also similarly protected but she said “I had that much gel on I was freezing. I didn’t feel a thing, the adrenalin rush was amazing.”

She did have a bout of nerves a couple of times, especially after watching the stunt woman rehearse. It led to a couple of sleepless nights but seeing the stunt rehearsed and everything turning out all right gave her confidence again.

It has to be a very tough thing to put yourself throught. Full marks to Debbie  who remarks:

“When we came to do it my heart was pounding in my chest and I didn’t speak. I just focused on the fact that I was about to be set on fire and thinking I must be crazy.

“I just zoned everyone out. I had put my trust in everyone and I knew I would be safe so I just got in the zone."

It certainly was an undexpected twist to the story and I hope they're going to be as realistic as possible showing Anna's long and painful recovery. I know it may be sped up a little for tv's accelerated timeline but I'm sure they're going to do this properly.

I thought the whole week was great and the stunt with the car flipping over and ending with the explosion and Anna's injury was breathtaking. Well done to all!