Who are Adam and Daniel? See our Ken Barlow family tree!

Confused by Ken's family tree? Be confused no more, Corrie fans. Here's our family tree and explanations as to whom Adam Barlow and Daniel Osbourne are - and where Peter fits into it all.

Ken Barlow's first wife was Valerie. They had twins - Peter and Susan.


We know that Peter Barlow is returning. Susan grew up to a right little madam. She married Mike Baldwin and they had a son, Adam, pictured below. Then Susan died in a car crash. Adam is Ken's grandson. He was born in 1988 which makes him 28 years old now.

Ken had a fling with hairdresser Denise Osbourne and he fathered a child with her, Daniel Osbourne. Daniel was born in 1995 which will make him 21 years old now.

Ken married Deirdre and adopted Tracy. Tracy is not blood-related to Peter, Adam or Daniel.

And as for little Simon? He's Ken's grandson, Peter's son. 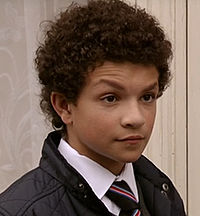