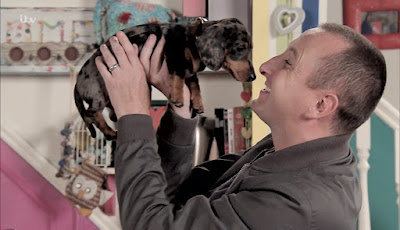 The Way to a Man's Heart award: In Kirk's case, it's either pizza or a puppy, preferably both! 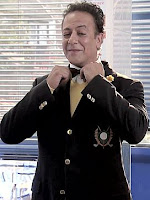 Secrets and Lies award: Nothing good ever comes of keeping a relationship secret.

Hot and Cold award: Michelle. She's ruder than a rude thing to Robert one minute, then pouring her heart out and leaning on him for advice the next.

Fashion Plate: Dev looks quite snazzy, doesn't he? Well, he thinks so, at least.

Throwback award: Seb seems to be a little thief. Years ago, Toyah had a boyfriend that tried to get her to steal from Roy. Are we going there, again? A boyfriend trying to lead Faye into a life of crime? 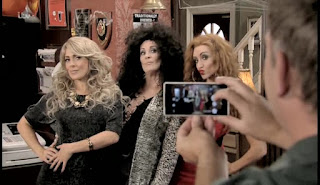 Costume win: The Witches of Eastwick behind the bar (most of them. See below). Mary as Mystic Mary though she looked like Snow White. Costume Fail: Steve and Kirk are both Uncle Fester! Michelle was supposed to be a witch. She looked more like Farrah Fawcett.

And the Oscar Goes To: Caz for all those performances about Maria harassing her.

Her mother's daughter: Oh gosh, didn't Asha look like Sunita with the makeup on and her hair pulled back?

David "I'm not going to do any more mobile barbeques if that's what you're worried about"
Michelle to Leanne "Until you've walked in my shoes, you can't tell what it's like" (Yes, I think Leanne fits those shoes though of course Michelle doesn't know that yet)
Michelle "I just couldn't cope. Does that make me the most selfish cow in the world?" (well, the temptation here would be to say Yes, Yes it does but that's not fair in this situation. )
Beth to Kirk "Come home and be my pickle again" (It worked!)
Johnny "I don't want a quote of the day, I want results"
Tracy "Are you saying I'm not a decent human being?" Robert "I'm saying, prove it" (I know he meant prove that she IS decent but it sounded like he wanted her to prove she wasn't. Ahem. She's done plenty of that already!)
Leanne "Who's first with the news then? My sister, your mum or should we just tell Norris and watch it run"
Steve "I plow me own furrow when it comes to fancy dress"