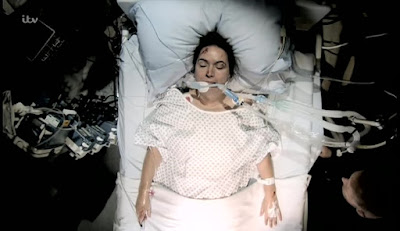 Soap Opera Phrase of Doom: Kevin about Anna moving in "I've got a really good feeling about this" (And there it is, folks)

Pulling Rank award: Audrey, as the landlady, orders Caz out of the flat. Hmmm. Will it work?

Clueless award: Aidan thinks Kirk is a mug for babysitting his nephew on his day off? Really? I bet he's also the kind of man that thinks looking after your own children is babysitting, not actually parenting.

The Best Defense is a Good Offense: Michelle giving Amy grief about listening in on a private conversation. You know, the one she was having out in the hallway instead of huddled behind a closed door somewhere that was actually... private.

Lines of the week:
Gail "It's family business" Robert "Oh? And what family is that? The Sopranos?"
David "This isn't a fairy tale. There are no happy endings"
Kirk about Caz "She's more sticky than a sticky bun"
Gail "David, when it comes to the workings of your mind, nothing would surprise me"
Gemma to Craig "Don't get any funny ideas, but will you hold me hand?"
Foreman of the Jury "Guilty!"
Kirk "As if I'm gay! It's hilarious! I wouldn't even know what to do!" (And somehow, I believe him)
Sarah "I'm a big girl. I think I can visit a woman in hospital without hanging my brother out to dry" and "I spend my whole life tiptoing around because of David's mistakes"